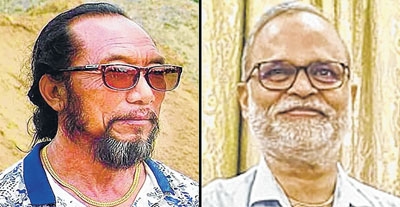 New Delhi, Apr 20
The Centre has extended the ceasefire agreement with three different Naga groups for one more year. The groups are National Socialist Council of Nagaland/NK (NSCN/NK), National Socialist Council of Nagaland/Reformation (NSCN/R) and National Socialist Council of Nagaland/K-Khango (NSCN/K-Khango).
All three groups are breakaway factions of NSCN (IM) and NSCN (K) and have signed ceasefire agreements with the Government over the years.
A statement from the Ministry of Home Affairs said that the ceasefire agreements were extended from April 28, 2022 to April 27, 2023 with NSCN/NK and NSCN/R and from April 18, 2022 to April 17, 2023 with NSCN/K-Khango. The agreements were signed on April 19.
The development comes even as NSCN (IM) leaders, led by general secretary Th Muivah, on Tuesday met with AK Mishra, Centre’s representative for Naga peace talks, at the outfit’s headquarters, Camp Hebron near Dimapur.
Former Special Director of the Intelligence Bureau, Mishra, who replaced RN Ravi as the Centre’s representative last year, arrived in Nagaland on Monday to discuss the Naga political issue. He is expected to meet the State Government’s Core Committee, as well as the Naga National Political Groups (NNPG) during his stay.
This is the first time that talks on the Naga issue were held inside the NSCN (IM) headquarters. The discussions on Tuesday lasted for little more than two hours.
The meeting comes a week after Nagaland Chief Minister Neiphiu Rio, Deputy Chief Minister Y Patton and former chief minister TR Zeliang met Prime Minister Narendra Modi and Union Home Minister Amit Shah in Delhi to discuss the status of peace talks, which seems to have hit a roadblock since 2019.
The Government has been trying to engage with various Naga groups, and not just NSCN (IM), to finalise the Naga peace accord. It is an approach that the NSCN (IM) has not been comfortable with, particularly since former Naga Interlocutor Ravi said the Naga peace deal would happen with or without NSCN (IM).
Last September, the Government had signed ceasefire agreement with the Niki Sumi faction of the NSCN (K).
The NSCN (K) had signed a ceasefire agreement with the Government in 2001, but withdrew from it in 2015 under the leadership of SS Khaplang, who is now dead.
The Indian Express