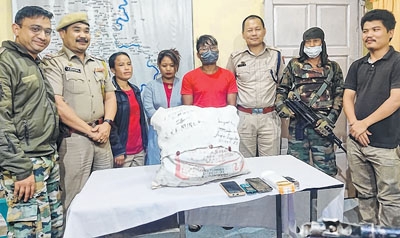 By Our Staff Reporter
IMPHAL, Apr 21 : A huge quantity of narcotic items including 10 kg of opium, 1.60 kg of heroin and 840 gram of brown sugar were seized from different parts of the State today.
Imphal West and Bishnupur commandos arrested two persons each along with drug items from their respective districts today.
According to reliable information, a team of Imphal West commandos arrested two drug peddlers including one VDF personnel posted at Imphal East from Thangmeiband Watham Leirak crossing today morning along with 27 plastic vials containing 34 gram (approx) of heroin powder.
The VDF personnel Md Muzamin Hussain (38), s/o (L) Md Kayamuddin of Khomidok Heikrumakhong Bazar and Md Amir Khan (34), s/o Md Abdul Latif of Mayang Imphal Bengoon Makha Leikai were arrested at around around 6 am.
From their possession, two mobile phones, one Honda Activa and Rs 1380 (in cash) were also seized.
The arrested persons along with the seized articles have been handed over to Imphal police station.
On the other hand, a team of Bishnupur commandos, while conducting a routine frisking and checking drive, arrested two persons from  Keinou Thongthak Maning Leikai Road along with 5 kg of opium today at around 4 pm.
The arrested persons have been identified as Nongthombam Premjit Singh (45), s/o (L) N Biren Singh of Tera Khongshangbi Wahengbam Leikai currently staying at Tingkai Khullen, Kangpokpi and Satminlen Kipgen (24), s/o Kaikam Kipgen of Loivol Khullen, Kangpokpi district.
Arrested persons along with the seized opium have been handed over to Bishnupur police station.
The Anti Smuggling Unit of Custom Division also seized 5 kg of opium from N Molhoiphai village at Imphal East district at around 11 am today.
As per a statement issued by the Custom Division, Imphal, the officers of its Anti Smuggling Unit pursued a grey Mahindra Scorpio bearing Nagaland registration number along Imphal-Ukhrul road.
Saying that the driver of the vehicle  stopped the vehicle at N Molhoiphai village and fled from the area, the statement maintained that a packet containing 5 kg of opium was found inside the election.
As per the statement, the seized opium is worth around Rs 10,60,000 but no information is given whether the value is based on international or local market.
A case has been registered.
In another instance, a team of Narcotic and Affairs of Border (NAB) Manipur arrested two women along with 100 soap cases containing heroin powder weighing around 1.26 kg from Khenjang village, Churachandpur district.
According to credible sources, the two women have been identified as   Nengneihoi Haokip (25), w/o Goumang Zou of Satang Village, Saikul and Nemjahat Haokip (40), w/o Thangminhao Haokip of Thadou Veng, Singnat currently staying at Zion Veng, Tuibong, Churachandpur. A case has been registered at NAB police station. Churachandpur Battalion of Assam Rifles under the aegis of IGAR (South) in a joint operation with Manipur Police also seized 840 gram of brown sugar  from a mobile vehicle check post near Tuilehluan village, Churachandpur district, today.
The brown was brought in a Mahindra Bolero, as per a statement of IGAR (S) and added that the seized narcotic is worth around Rs 1.68 crore in the international market.
The drug peddlers have been handed over to Churachandpur police station along with the seized items.