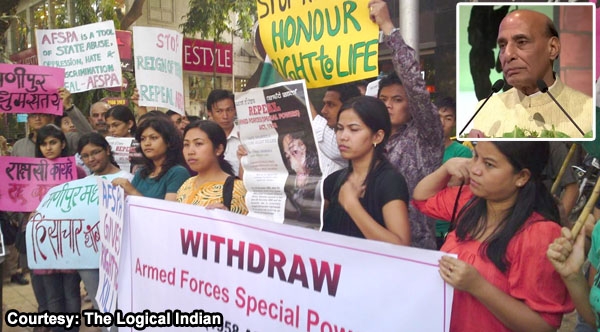 Guwahati, Apr 23
Defence Minister Rajnath Singh, who is on a day-long visit to Assam, on Saturday lauded the Centre and the State Government for significantly reducing the footprint of the Armed Forces Special Powers Act (AFSPA) in the North East.
Speaking at the felicitation ceremony of 1971 War Veterans in Guwahati, he said the work of removing AFSPA is underway for the last three to four years in North Eastern States.
"It's no small thing that for the last 3-4 years, the work of removing AFSPA is being done in the North Eastern States. Recently AFSPA was completely removed from 23 districts of Assam," ANI quoted the Defence Minister as saying.
"AFSPA was removed from 15 police stations in Manipur and Nagaland. That in itself means a lot. This is the result of durable peace and stability in this area," he added.
The Central Government had recently announced the withdrawal of AFSPA from 15 police station areas in seven districts of Nagaland; 15 police station areas in six districts of Manipur; 23 districts entirely and one district partially in Assam.
“In a significant step, GoI under the decisive leadership of PM Shri @NarendraModi Ji has decided to reduce disturbed areas under Armed Forces Special Powers Act (AFSPA) in the States of Nagaland, Assam and Manipur after decades,” Union Home Minister Amit Shah had said in a tweet.
The Assam Government has organised the award ceremony to honour the sacrifices of soldiers who took part in the 1971 Bangladesh Liberation War. Assam Chief Minister Himanta Biswa Sarma, his Cabinet colleagues, and senior Government officials were also present at the event.
The Defence Minister will also attend the 7th India Industrial Fair (UDYAM 2022) at the veterinary field, Khanapara in Guwahati later in the day. Tight security arrangements have been made in Guwahati for the Defence Minister's visit.
Times Now