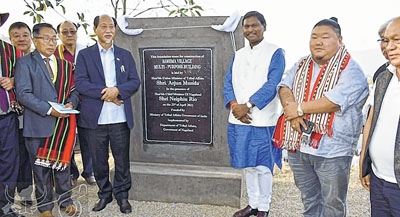 Newmai News Network
DIMAPUR, Apr 25 : Union Minister for Tribal Affairs, Arjun Munda said today that it is the vision of the Prime Minister to see that the North Eastern States come at par with the developed States of the country. He added that the Government of India is putting in a lot of effort to see that development in all the areas are looked into so the people of the region do not feel left behind. He also said that the development of tribal areas should be ensured, a DIPR report said.
The Union Minister said this while laying the foundation stone of the Kohima Village Multipurpose (KVM) building at Kohima Village Ground, Ziekezou in Nagaland today, the report added.
The Union Minister said that there are over 700 tribal groups in India with their own unique identities, traditions, cultures and languages. Being a tribal himself, he said that whereever one goes in the midst of tribal people, one sees the characteristics of the tribal people. According to the DIPR report, Munda further said that in terms of culture and tradition, all tribals in the country are one. Munda added that most of the aspirational districts are tribal areas and their priority is to visit all the aspirational districts in the country.
Nagaland Chief Minister, Neiphiu Rio, while speaking at the programme, called Munda “a friend” who has a deep concern for the tribal people. He stated that the Union Minister laying the foundation stone was a blessing. Rio then urged Munda for release of funds for the building on time so that the building will be completed as scheduled.
Minister for Higher Education and Tribal Affairs, Temjen Imna Along, who also spoke at the function, informed that the first phase of fund has been released by the Ministry of Tribal Affairs to the Department of Tribal Affairs, Government of Nagaland. He urged the village leaders to issue land certificates and other papers, and for construction to start early so that the Department of Tribal Affairs can co-ordinate with the Ministry of Tribal Affairs to get the remaining funds early.
The Education Minister expressed hope that the project would be completed at the earliest.