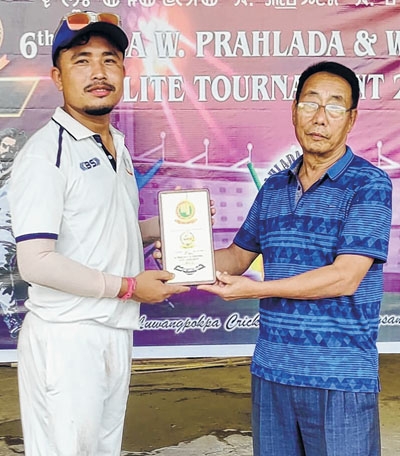 By Our Staff Reporter
IMPHAL, Apr 28 : CYCLONE, Thangmeiband cruised to second win in the 6th MNCA W Prahlada and W Ramananda Elite Tournament beating Blue Hawk, Khurai Lamlong by 4 wickets here at Luwangpokpa Cricket Stadium, Luwangsangbam.
Opting to bat first, Blue Hawk did not have the best of starts as CYCLONE bowlers gave in fine performance and eventually bundled out for 145 runs in 34.4 overs. CYCLONE then chased down the target within 33.4 overs with four wickets left to spare.
Blue Hawk captain, Wakambam Samson turned out to be first victim as he walked out for 9-ball 1 with left arm fast bowler Bikash bowling him out in the third over with 9 runs on the scoreboard.
After adding just 12 runs in 40 balls, Laishram Ronson Singh was trapped lbw for 14 by Kabrambam Homendro before Thoudam Akshaykumar further reduced Blue Hawk to 48/3 in 16.2 over dismissing Amom Guniram for 11.
When the fourth wicket partnership between Sanatomba and Nongthombam Ajit look to ease the pressure, Akshaykumar removed Ajit for 23 to make it 82/4 for the Khurai side.
Longjam Ronald then sent Goutam Soibam packing for 12 in the 29th over before dismissing Sanatomba (43) who looked set on the crease to heap more pressure on Blue Hawk.
Bikash Singh who hit a ton and took four wickets in the previous match against WYC, Thoubal Wangkhem then completed his three wicket haul by dismissing Sunil Salam for 14 and Ningombam Jackson for nought and reduced Blue Hawk in the last two balls of the 34th over.
Kabrambam Homendro then caught and bowled both the remaining wickets for ducks the very next over.
In the chase, CYCLONE had faced stiff opposition early on and lost Narsingh Yadav for 19 to Sunil Salam before Jenpu Kamei and Longjam Ronald resurrected the chase by forging a 54-run crucial second wicket partnership.
However, Ronald got hit wicket for 27 off Mutum Pritam's bowling in the 19th over before Jitendra Bishan Thakur got into action to remove Jenpu for 30 (58 balls) to make it 94/3 after 22.2 overs.
Loktongbam Santosh (12) was caught and bowled by Jitendra Bishan Thakur and Thoudam Akshaykumar edged to wicketkeeper Nongthombam Ajit off Sunil Salam bowl in the 28th over for the fifth wicket.
Wakambam Samson too did his well to pile pressure on CYCLONE by dismissing Paul Zomi but Bikash Singh (21 off 27 balls) and Kabrambam Homendro (9 off 9 balls) stood firm to steer their team to winning 146 with 5.2 overs and four wickets left in hand.
Eventually Bikash Singh who picked three wickets and added an unbeaten 21 in the chase was adjudged man of the match.
FORCE, Kshetrigao will play CRAU, Khamnam Bazar in the next match tomorrow.