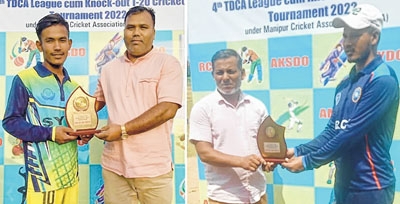 By Our Staff Reporter
IMPHAL, Apr 28 : RCA, Lilong and SYDO, Sambrukhong notched up their second straight victories in the 4th TDCA League Cum Knock-out T-20 Tournament today.
RCA having won their previous match against AMCA, Moijing by 10 wickets, sealed a 15 run victory against AKSDO today at Thoubal Moijing playground for the second straight win.
After winning the toss RCA posted a total of 117 runs for the loss of 8 wickets courtesy Shamir half century and held AKSDO to 102 all out in 20 overs as the bowling attack led by Aziz Mirza proved effective.
RCA had a stuttering start losing Aziz Mirza on duck but Shamir came to the rescue and struck 32-ball 50 to take the tally past the hundred mark.
Imaran (15) and Shahid Hussain (17) also made significant contributions in this innings which saw Kadamjit bag thrice for 15 runs and N Sanjit, Ingobi and Mangang picking up a wicket each.
In reply, N Sanjit (27) and Kadamjit (29) struggled to steady the chase after opening over tragedy, but their efforts were not enough to change the course of the game.
Notably, Aziz Mirza picked up a hattrick in this innings to return with the best bowling figures of 3/12 in 3 overs as his compatriots, Saba Khan and Jameer managed two wickets each.
Sameer of RCA was named man of the match.
Earlier in the day, SYDO defeated CAL, Masjid Road by 54 runs for the second win in the tournament having beaten AKSDO by 1 wicket yesterday.
SYDO won the toss and stacked up a huge total of 173 runs for 7 in allotted 20 overs courtesy sensible batting by Irfan (44 off 28 balls), Saddam (29 off 24 balls), Riyajuddin (25 off 14 balls) and Raeesh Khan (22 off 18 balls).
Imtiyas of CAL managed two wickets in this innings before they ended up gathering 119 runs for 7 in the chase as SYDO bowlers succeeded in maintaining a good economy.
Nawaz (23) was the highest run getter for the losing side followed by Warish (16), Danish (16 not out) and Sohail (12).
SYDO's Sarif Alam (2/10 in 4 overs) and Rafik (2/27 in 4 overs) made their mark by picking up two wickets each in this innings.
Irfan who topscored for SYDO was eventually adjudged man of the match.
AMCA, Moijing will play AKSDO, Khangabok in the next match tomorrow.