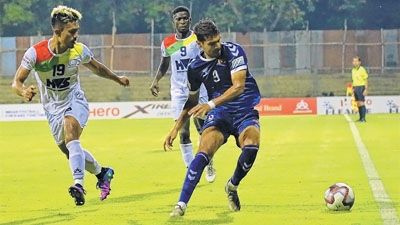 KALYANI, Apr 28
Kenkre FC held Tiddim Road Athletic Union (TRAU) to a goalless draw in the Hero I-League on Thursday at the Kalyani Stadium, extending their unbeaten run to three games. TRAU were the better team, as they controlled midfield play with 57 per cent ball possession. They fired 19 shots, seven of which hit the target, but it wasn’t enough to break the tie. Kenkre, on the other hand, fired 11 rounds, six of which hit the mark.
TRAU got off to a fast start in their third game of the relegation phase, with Joseph Olaleye and Laishram Milan Singh attempting to create early chances for their team. Kenkre, on the other hand, relied on their defensive prowess. Kenkre came into this game on the back of two straight victories, and it showed in their performance.
In the fifth minute, Brazilian star Fernandinho came close to breaking the stalemate, but an extraordinary save by Kenkre goalkeeper Padam Chettri denied him a well-deserved goal.
Fernandinho attempted another long-range shot in the 15th minute, but it went wide as TRAU continued their assault in the first quarter of the game. Joseph attempted to create a wonderful opportunity for his team by setting up Fernandinho with a ball in the opposing box, but the Brazilian was unable to convert the opportunity.
After being set up by Fernandinho, Khanngam Horam attempted a close-range goal in the 20th minute, but the goalie easily stopped his effort. He had the option of returning to Fernandinho, but he chose to try his luck instead.
After failing to find someone to pass the ball to, Jospeh tried another shot at goal from a yard in the 37th minute. Padam Chettri expertly saved Joseph’s effort.
In the 39th minute, TRAU were awarded their second corner. Naresh Singh Yendrembam took the corner and played a fantastic ball to Khanngam Horam, but his header hit the crossbar, and TRAU failed to hit the back of the net once more.
In the 42nd minute, Fernandinho and Joseph collaborated to produce another opportunity for TRAU, but it was not converted. Horam attempted another header in the 45th minute after receiving a ball from Roshan Singh but it was cleared by Suraj Jeet Singh Negi.
TRAU kicked off the second half on the front foot, continuing their attacking in the hope of earning their first win in the league’s second phase. Meanwhile, Kenkre picked up the pace as the game progressed, looking to counterattack.
In the 54th minute, Joseph attempted another shot, and K Krishnananda Singh came sprinting to score a tap-in, but Padam Chhetri decided to gather the ball and avoided any mistakes. Horam tried another shot in the 56th minute and came within a whisker of beating Chhetri at the far post, but his effort went wide.
Kenkre’s best chance came in the 58th minute when Akeraj Martins attempted to set up Ranjeet Singh Pandre. The striker was unable to locate the ball, which was recovered by Loitongbam Bishorjit Singh.
In the 68th minute, Sapam Bishorjit Meitei took another shot for TRAU, but he was denied by an excellent save by Chhetri, who stretched his left foot to stop the ball.
Ranjeet made a magnificent attempt for Kenkre in the 79th minute but Bishorjit stood tall to deny him the goal. Ranjeet was the standout player for his team but was replaced by Arya Gandharva during the stoppage time.
TRAU made several attempts as the game came close to the end and were the better team throughout the game. They will be disappointed with the result. AIFF Media Team