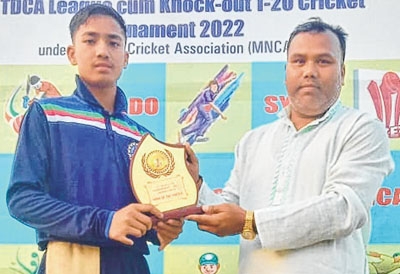 By Our Staff Reporter
IMPHAL, Apr 29 : AKSDO, Khangabok ended their 2 game winless run in the 4th TDCA League Cum Knock-Out Tournament beating AMCA, Moijing by 81 runs in their third match at Moijing playground today.
Put in to bat first, AKSDO stacked up a respectable total of 183 runs for 6 wickets in allotted 18 overs and held AMCA to 82 for 6 for the big win.
Thoiba shone with a 33-ball 52 in AKSDO's innings as Chinglensana and Sanjit added 35 and 37 runs respectively.
Mathem of AMCA managed a wicket in this innings before they succumbed to 82 for 6 as AKSDO bowlers did well to remove the openers for ducks and inhibited remaining order from recovering.
Sushil (33 not out) and Boynao (13 not out) did struggle to enhance the strike rate but it was too late for the Moijing team.
AKSDO's Kadamjit (2/19) and Ingobi (2/24) managed two wickets each in this innings as Sanjit and Akash clinched a wicket each.
Thoiba who shone with a half century was adjudged man of the match.
Tomorrow's matches
AKSDO vs CAL (Morning) and AMCA vs SYDO (Afternoon)