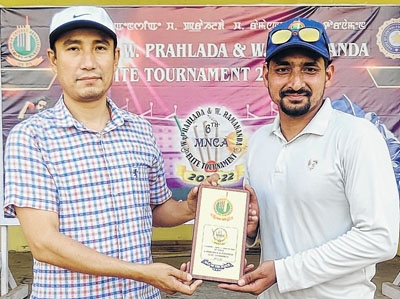 By Our Staff Reporter
IMPHAL, Apr 29 : Mehtab Jamal played a masterful 40-ball 78 knock after taking two wickets to steer CRAU, Khamnam Bazar to opening match victory against FORCE, Kshetrigao in the 6th MNCA W Prahlada and W Ramananda Elite Tournament at Luwangpokpa Cricket Stadium today.
After winning the toss and opting to bat first, FORCE bundled out for 205 runs in 39.1 overs as CRAU bowlers put in a disciplined performance and the latter chased down the target within 35.4 overs to open their account in the Group A competition.
CRAU took 10.1 overs to find the breakthrough as Md Alfash and Saddam Ahamad Shah forged a notable 50 run partnership before Md Alfash departed for 10 in 25 overs.
Saddam Ahmed successfully anchored well and clobbered 7 fours and 5 sixes before he was lbw out for 69-ball 77 for the second wicket after 19.3 overs.
Arshad Ali (17), Thokchom Nishikanta (24), Khushru Pravez (16), Md Islauddin (17) and Pravesh (18) then kept the scoreboard ticking with their small but significant contributions and took the tally past the 205 run mark.
Takhellambam Kala Singh emerged the pick of the CRAU bowlers as he clinched three wickets for 35 runs in 8 overs including two wickets in the 35th over.
Mehtab Jamal also proved vital in bowling as he snared the last two wickets for 30 runs in his spell of 7.1 overs and found the fence 13 times including 5 sixes en route to his unbeaten 40-ball 78 in the chase.
Lamabam Ajay Singh of CRAU also fetched two wickets for 33 runs in 8 overs.
In reply, Dennis Khangenbam and Inikhil set the initial momentum for CRAU putting up a 75-run partnership in 16.1 overs before Md Alfash bowled out Dennis for 33 runs.
The next over saw Phjodas went off for 1 to Tashib Alam for the second wicket but Khangembam Bimol and Inikhil made sure the chase remained intact for a while.
CRAU were further reduced to 114/4 after 24.2 overs with the departure of Inikhil (32) and Potshangbam Ronil Singh (10) but it failed to derail the chase as Bimol (33 not out off 49 balls) and Mehtab Jamal (78 not out) produced a fierce 95-run fifth wicket partnership to help CRAU post a winning 209.
Mehtab Jamal who shone with both the ball and bat was eventually adjudged man of the match.
Al-Ameen will play SCCC in a Group B league match tomorrow at the same venue.