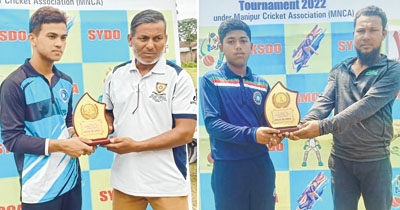 By Our Staff Reporter
IMPHAL, Apr 30 : AKSDO, Khangabok grabbed their second win after two straight losses in the ongoing 4th Thoubal District Cricket Association League Cum Knock Out T-20 Tournament thrashing CAL, Masjid Road by 7 wickets today at Moijing playground.
Electing to bat first, CAL gave AKSDO a target of 55 runs for 8 wickets in the allotted 15 overs and the latter team eased to winning 56 within 6.5 overs at the cost of 3 wickets.
In CAL's innings Anas 13 not out was the highest run getter followed by Sarif 11 as Kaiku excelled and claimed three wickets for 12 runs in his spell of 3 overs while Mangang claimed twice for 13 runs in 2 overs to exert a strong pressure on CAL.
Needing 55 for the win, Thoiba provided AKSDO initial flourish adding 20 runs off 13 balls before Kadamjit (15) and Wincelly (8) finished off the chase. ASKDO's Kaiku was eventually named man of the match.
Meanwhile in the 7th match of the double league tournament, AMCA who went down to RCA and AKSDO in the previous two matches opened their winning account by beating confident SYDO by 5 runs.
Electing to bat first AMCA rode on Naeem 46-ball 50 to post a total of 103 runs for 5 in 16 overs and held SYDO to 98 all out in the last over thriller.
Pravesh 13 and Sushil 12 also managed double digit scores for AMCA in their innings which saw Imaran of SYDO snare two wickets and his compatriots, Sharif Alam, BM Irfan and Mustak claiming a wicket each.
SYDO who had sealed two straight victories earlier, however had a forgettable chase as they bundled out for 98 in the last delivery of their innings.
Pravesh produced a fine bowling display to claim three wickets for 10 runs in 4 overs while his compatriots, Sushil (2/9), Yahiya (2/36) and Kanta (2/25) claimed two wickets each.
Naeem who topscored with a half century for AMCA was named man of the match.
AMCA will play CAL in the next match tomorrow morning while RCA will play SYDO in the afternoon match.