PM bats for use of local languages in Courts 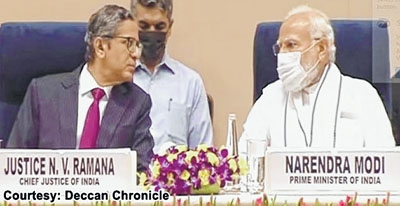 New Delhi, Apr 30
Prime Minister Narendra Modi, while advocating use of local languages in Courts, said on Saturday that the Government is working towards simplifying laws passed in the Parliament for the common man to understand them.
“Along with the actual legislation, if a simplified version is also passed in the Parliament for the common man to understand, then he will not have to go to the Court for interpretation of the law. The Government is studying this issue,” said PM Modi while addressing the Joint Conference of the Chief Ministers and Chief Justices of High Courts.
On improving access to justice, the Prime Minister also stressed on using local language for studying and practicing the law. “I am glad that the Chief Justice of India mentioned having High Courts using local languages. It will take a long time for that, but it will improve access to justice. Why can’t medical and technical education be done in our mother tongue. Some States are already doing it,” the Prime Minister added.
Chief Justice of India NV Ramana had earlier said that in a boost to ‘Indianisation of the justice delivery system”, linguistic barriers must be removed and practice in local languages before High Courts must be enabled.
Prime Minister invoked a vision for the future of the judiciary, urging the Judges and Chief Ministers to set the goal for 2047 when India would celebrate 100 years of Independence. “Integration of judiciary with digital India is very important. As we adapt to digitalisation, even in villages, citizens will have similar expectations from the judiciary too,” he added. PM Modi also highlighted that despite the pessimism, India has adapted to a digital economy and transactions in villages, too, happen via the online mode.
“About 40 per cent of all digital transactions in the world happen in India. This is the India that will expect the same speed from the judiciary,” he added. On the issue of repealing obsolete laws, PM Modi said States have been lagging behind when it comes to addressing this issue. While the Centre has nixed 1,450 obsolete laws over the last seven years, States have only repealed 75, he informed. The Prime Minister also appealed to the Chief Ministers and Chief Justices of High Courts to grant bail in a timely manner and highlighted that there are over 3.5 lakh undertrials currently in prison.  “These undertrials are largely poor people. Wherever possible, they must be released on bail,” he added. The Indian Express