Mao Keithel finds many takers; rooms for improvement pointed out 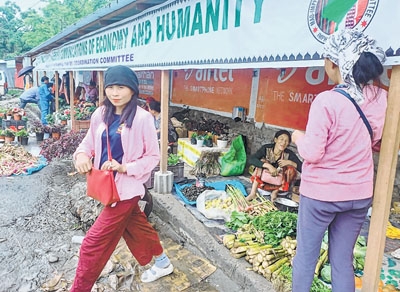 By Our Staff Reporter
IMPHAL, May 10 : Mao Women Business Union (MWBU) president Kapeini has thanked the State Government for setting up Mao Keithel at Kabo Leikai on DM College Road, saying that the keithel has been booming since its new shed was inaugurated on April 8.
Speaking to The Sangai Express, Kapeini  said that the Mao Keithel has only been booming since its inauguration on April 8 as many people opt to buy flowers and fresh fruits and vegetables from the market directly.
She said that the vendors at Mao Keithel would be more thankful if the Government could instal a veranda at the shed to prevent  fruits and vegetables spoilage during monsoon season.
Kapeini continued that the rate of spoilage is higher among those fruits and vegetables which have been exposed to rainfall.
Saying that 20-25 of vehicles carrying goods from Mao reach Imphal every Tuesday and Friday while the figure is lower on the remaining days, Kapeini maintained that the market, on average, sell flowers worth around Rs 10,000 everyday and vegetables worth around Rs five-six thousand.
She further said that Mao Keithel is popular among the buyers for selling seasonal fruits and vegetables.
Claiming that bathrooms of the keithel have also been damaged by unknown miscreants, possibly in late hours and as such the vendors had to buy water whenever needed, Kapeini urged the State Government to consider hiring a chowkidar for the keithel so as to avert such cases in future.
Saying that the Mao Keithel is a little congested and as such the vendors sell their  wares on rotational basis, Kapeini added that the Mao-Imphal Market Coordination Committee has about 260 members.
The MWBU president said that the vendors at Mao Keithel  usually make Rs 500 everyday after excluding transportation charge and others.
Continuing that potato, plum, passion fruit  and different vegetables are abundantly grown in Mao, Kapeini stated that Mao alone can provide fruits and vegetables to the entire Manipur throughout the year if the Government instals a cold storage facility in the area.
Kapeini maintained that Mao is also popular for its organic produce as the majority of the farmers there don't use any fertilizer in growing fruits and vegetables.