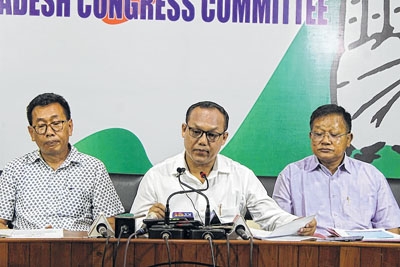 By Our Staff Reporter
IMPHAL, May 10: Taking strong exception to cancellation of 1255 different works listed under PWD which were given financial approval during 2020-21, Congress party has demanded a white paper from the BJP-led Government on the same matter.
Speaking to media persons at Congress Bhavan here today, MPCC president K Meghachandra said that altogether 1255 works amounting to Rs 66,868.50 lakh were cancelled by an order issued in the name of the Governor on May 4.
All these works, now cancelled, were assured by the previous BJP-led Government to the people in the run up to the election and the Government even granted administrative approval for these works, Meghachandra said.
Saying that necessary funds for these works were incorporated in the budget after they were discussed in the State Assembly, the MPCC president questioned  as to where the funds earmarked for these works were diverted.
He urged the Government to institute an enquiry into the matter.
Meghachandra said that the BJP-led Government has reduced the proceedings of the State Assembly to a farce.
Cancellation of as many as 1255 works which had been already granted administrative approval indicates that the BJP-led Government has not done any development work, he said.
Questioning how BJP hoodwinked the masses in the sole interest of winning election, Meghachandra remarked that cancellation of all the works of a major department listed for a year is    something unprecedented in the political history of Manipur.
MPCC working president Victor Keishing and senior spokesman Bhupendra Ningomba were also present at the press meet.