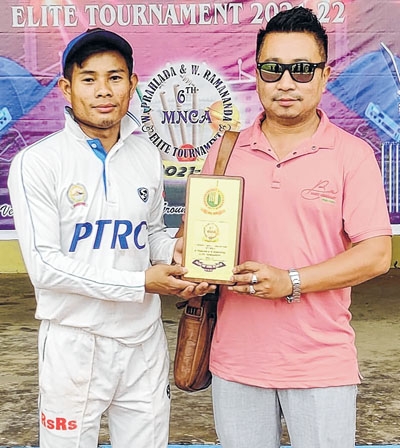 By Our Staff Reporter
IMPHAL, May 9 : PTRC, Patsoi rode on exemplary all round performance from Ngariyanbam Johnson to demolish FORCE, Kshetrigao by 152 runs for the third Group A straight victory in the 6th MNCA W Prahlada and W Ramananda Elite Tournament here at Luwangpokpa Cricket Stadium, Luwangsangbam today.
FORCE had to rue their decision to field first as Gemson Mutum (44 off 62 balls) and Ngariyanbam Johnson (80 off 72 balls; 9 fours and 1 six) stitched together a total of 102 runs for the third wicket in 98 balls to give the flourish after first over upset and Chingakham Bidash Meitei blasted off 83 off 49 balls finding the fence 11 times (3 fours and 8 sixes) to guide PTRC to 243 for 10 in 40 overs.
FORCE's spin duo of Mushir Alam (3/33 in 6 overs) and Khusru Pravez (3/57 in 7 overs which contained a maiden) made their mark in the innings with their impressive bowling performances however their chase FORCE was a heartbreak, as PTRC bowling attack led by Khaidem Joyraj proved too efficient and bowed them out for just 91 runs within 22.2 overs.
Like Khangembam Santosh of PTRC was bowled out for 3-ball duck in the opening over, FORCE lost Md Alfash for 5-ball duck in the fifth delivery of the first over of the chase.
His opening partner Saddam Ahamed was bowled out for a golden duck by right arm off break bowler Khaidem Joyraj Meitei in the first delivery of the second over before Shapam Kenjit completed his two wicket haul dismissing Md Islauddin for 6 when the scoreboard read 17 after 5 overs.
The downward trend continued as FORCE were reduced to 39 for 5 in 8 overs with Kh Joyraj and Kh Santosh removing Thokchom Nishikanta (6) and Khusru Pravez (12) respectively.
Arshad Ali Shah (32) who came in for the second wicket maintained his calm and forged 45 runs off 75 balls for the 6th wicket with Tashib Alam (17) but he was trapped lbw by star of the day Ng Johnson in the third ball of the 21st over . The wicket proved to be a turning point as Johnson succeeded in claiming his second wicket in the very same over  bowling out Pravesh for 2.
Joyraj then trapped Mk Tamim lbw for 4-ball duck and eventually returned with the best bowling figures 4/28 in 6 overs which contained a maiden. Mustofa then holed out to Loitongbam Shitaljit Singh for a golden duck off Khwairakpam Rinku's second ball of the 23rd over to mark the end of the chase.
Ngariyanbam Johnson of PTRC who shone with both the bat and ball was eventually adjudged man of the match.
BLUE HAWK are set to take on SCCC in the next Group B league match of the tournament tomorrow.