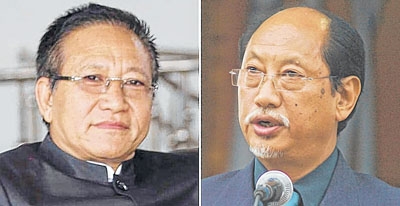 NEW DELHI, May 9
Preventing the BJP from “taking advantage” of a possible split in their votes may have made most MLAs of one regional party to “merge” with another in Nagaland.
On April 29, all but four of the 25 MLAs of the Naga People’s Front (NPF) switched over to the Nationalist Democratic Progressive Party (NDPP). Both are allies of the BJP in the United Democratic Alliance (UDA) Government.
The switchover, which the NPF refers to as a merger, happened almost eight months after the NPF joined the NDPP-BJP alliance Government to make the 60-member Nagaland Assembly Opposition-less. Two Independent MLAs have been part of the Government.
UDA chairman and former Chief Minister TR Zeliang said that he and 20 other NPF legislators joined Chief Minister Neiphiu Rio’s NDPP in order to prevent a “third party” from taking advantage in Nagaland’s electoral politics.
“When there are two strong regional parties in the State, a third party will always try to take advantage. The third party may be the BJP, the Congress or any other party,” he told journalists on Friday evening.
‘Not an overnight development’
He also said the “merger” was not an overnight development. It was an outcome of thorough deliberations between the NDPP and the NPF since 2021, primarily to facilitate the Naga peace process involving more than a dozen extremist groups.
After the “merger”, the NDPP’s seat count in the Assembly increased to 42. The BJP has 12 MLAs and the NPF four.
Mr Rio is believed to have engineered the defection of the NPP legislators to the NDPP in order to “tame” the BJP. He reportedly pre-empted a bid by the BJP to dump the NDPP and form an alternative Government in alliance with the NPF.
The NPF is a minor ally of the BJP in the Nongthombam Biren Singh Government in adjoining Manipur.
The Hindu