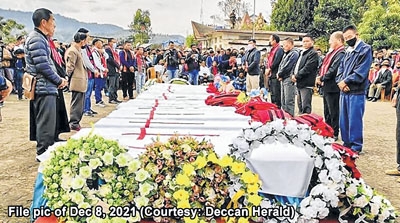 New Delhi, May 10
Army Chief Gen Manoj Pande on Monday said the investigation into the December 4 firing incident in Nagaland’s Oting in Mon district has been completed and the report is now undergoing legal scrutiny.
In an interaction with a group of journalists, he also suggested that standard operating procedures and drills could be refined based on the findings of the report.
The botched counter-insurgency operation at Oting village in Mon district of Nagaland claimed the lives of 14 civilians and it triggered a massive public outcry in the State.
The Army had ordered a high-level inquiry into the incident. The probe team was headed by a Major General.
“The investigation into the Mon incident has been completed. The report has been submitted and presently the legal scrutiny of the report is taking place,” Gen Pande said.
“Just like in the past, if we find some personnel who have not followed the standard operating procedures and guidelines, action as per the due process of military law will be taken,” he said.
The Army chief indicated that the report delved into aspects such as a revision of the standard operating procedures (SOPs) and refining the drills.
“It is all part of the report,” he said when asked whether the Army is changing any SOP.
Gen Pande suggested that the process of addressing shortcomings would be based on the findings of the report.
“Some of it has already happened,” he said.
Apart from the Court of Inquiry by the Army, the State Government appointed a Special Investigation Team (SIT) to probe the incident.
The Army had described the incident as “highly regrettable”.
PTI