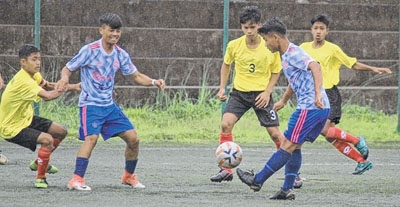 By Our Staff Reporter
IMPHAL, May 10 : Kangla Ukok MES, Unique Model Academy (UMA), Success School and Diana English School secured wins in the Imphal East District Level Subroto Mukerjee Football Tournament for U-14 boys underway at Artificial Turf, Lamlong Thongkhong.
Kangla Ukok MES edge out Young Pioneers Academy 4-3 in the first match of the competition after trailing by 1-2 goals till the break.
S Lamnganba shone with a treble (7', 14', 33') for Young Pioneers Academy but it all went in vain as S Munishang (21', 35'), Y Arjun (31') and L Borish (58') helped recover the deficit and eventually the 4-3 comeback win.
Meanwhile in the second match, K Kingson (11') and Ch Reevaldo (32') scored to hand UMA a 2-1 win over Youngstar DES, Angtha. The lone goal of the Angtha team was scored by L Yohenba in the 14th minute of the match.
In the third match, Success School-Sawombung beat Royal Academy School 5-3 in the tiebreaker after playing out a 1-1 draw in the regulation time.
It was S Ayangba who opened the scoring for Royal Academy in the 5th minute but Success School pulled level in the 29th minute.
And with the two sides failing to find the winner, the game was decided via penalty shoot out where in S Raj Meetei, S Drunao, T Debo, K Ronald and Poirenganba all found the target for Success School and only S Rahul, Th Yaiphaba and S Rajkumar scored for the losing team.
In another similar encounter staged later in the day, Diana English School, Porompat beat Free Progress Academy, Uyumpok 5-4 on penalties after settling the regulation time in a 1-1 draw.
W Lun (9') gave Free Progress Academy the lead only to be equalised by Th Dingding (40') for the Porompat team. As the scoreline remained locked at 1-1 till the final whistle, tie-break had to decide the game.
In the shoot-out, Th Yohenba, Y Roshan, T Newton, Mohadish and Alvish scored from the spot for the Porompat side as Y Johny, Y Sachin, D Dhanachandra and W Lun found the target for Free Progress Academy.