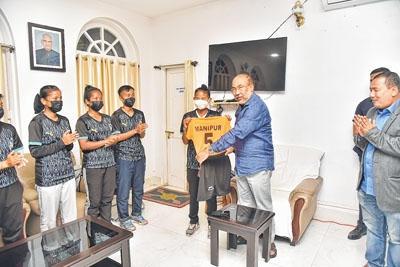 IMPHAL, May 10 (DIPR)
Chief Minister N Biren Singh today wished luck and success to the 18 players and officials of the Manipur team for XII Hockey India Sub-Junior Women National Championship 2022 which will kick off from Wednesday here in Imphal.
The Chief Minister, interacting with the young players, said it is a pride moment for the State to organize such a National level tournament.
He said, "Being the hosts of the tournament we should set an example before the other teams. We should showcase our sporting spirit and respect the visitors, and at the same time play to win."
N Biren Singh also handed out team jerseys to the young players at the occasion.
Youth Affairs and Sports Director T Phulen Meitei and other officials also attended the brief interaction programme.
The tournament, which will commence from tomorrow will be participated by teams from 25 States and will culminate on May 22.