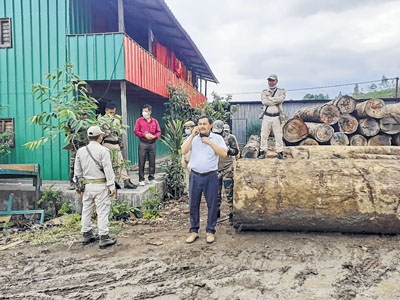 Our Correspondent
THOUBAL, May 11: Thoubal Forest Division has started closing down saw mills and plywood factories operating beyond the norms and regulations issued by the Forest Department in Thoubal district.
A team led by Thoubal Forest Division, DFO, Th Lokendro on Wednesday conducted  drives against illegally operated factories and seized various items.
Speaking to media persons, Th Lokendro informed that the North East Wood Industry located at Khongjom has been shut down as many discrepancies were found in the operation of the factory.
Stating that the Wood Industry was reportedly operating without a valid license, the DFO mentioned that legal actions would be initiated against the manager of the said industry.
Th Lokendro further stated that the timbers found in the vicinity of the industry will also be seized.
Thoubal RO, S Samungou; Beat Officers under Thoubal Forest Division and police personnel also took part in the drive.