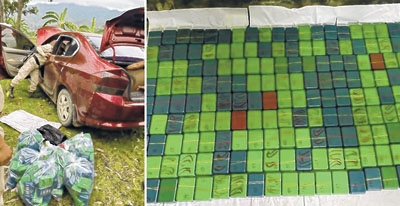 By Our Staff Reporter
IMPHAL, May 11 : In a massive drug seizure case, a team of Kangpokpi police arrested at least three persons including one Head Constable of Manipur police along with a huge stash of heroin worth around Rs 31,80,00,000 (Rs 31 crore, 80 lakh) in  the international market and Rs 63,60,000 in the local on May 9 on National Highway-2.
Reportedly, the heroin weighed around 2.13 kg and they were found concealed inside 212 soap cases.
Kangpokpi police, on learning about the possibility of transporting narcotics along Imphal-Dimapur route, carried out a frisking drive under the supervision of Kangpokpi SP Amrita Sinha.
During the frisking, one Honda City without a registration number was detained for verification at around 1.30 pm and the occupants of the car identified themselves as Solensei Haokip (23), s/o Thanglun Haokip of G Khonom village and Jamgoulen Haokip (21), s/o Letthang Haokip of Kingkin village, Churachandpur, said the sources.
The heroin was seized while searching the vehicle in the presence of Executive Magistrate Puyam Rahuldev (SDC Kangpokpi) and independent witness, it said  and added that the seized narcotic is valued over Rs 31 crore in the international market.
On further interrogation, it was learnt that  the heroin was obtained from Lunmingthang Haokip alias Mimin Taqchapa (33), s/o (L) Holkholet Haokip of Kholmum village, who is a Head Constable of the Manipur Police Department posted at Churachandpur and attached with CID Special Branch at Henglep post.
The Head Constable was also arrested yesterday and one Mahindra Thar confiscated from his possession, the sources continued.
The trio was produced before the Court today and they have been remanded to police custody for 10 days.
Kangpokpi SP rewarded the police officers leading the team in the seizure of drugs with citations and cash rewards.
SP Kangpokpi Amrita Sinha also declared the district police steadfast stand to stop drug trafficking and sought cooperation from the public.
Officer-in-Charge of Kangpokpi, Inspector Sunil Kumar appreciated the commitment of civil society organizations based in Kangpokpi including KTC, KWWO, and KYU for their bold and firm decision to ban drug and poppy cultivation in the district.