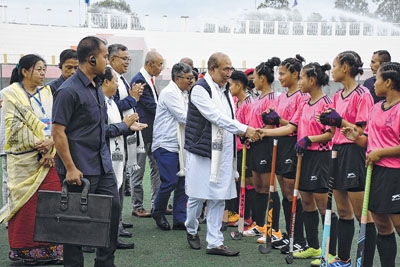 IMPHAL, May 11 (DIPR)
Chief Minister N Biren Singh today kicked off the 12th Hockey India Sub Junior Women National Championship 2022 at Khuman Lampak Sports Complex, Imphal.
The championship is organised by Manipur Hockey under the aegis of Hockey India and will continue till May 22. Altogether 25 teams from different States and Union Territories will be competing in the National event.
Speaking at the occasion, N Biren Singh expressed his thankfulness to Hockey India for giving the opportunity to organize such a National event in the State and appreciated President, Hockey India Gyanendro Ningombam for his initiatives to further develop hockey in the State.
He continued that the championship would be a beginning for all participating young players to go forward to higher level and added that the event would also encourage and motivate young players of the State to practice with much dedication.
The Chief Minister informed the young hockey players that Manipur, although being a small State, had produced 19 Olympians so far and as such, the State Government had started construction of an Olympian Park in honour of their dedication and commitment in the field of sports.
He stressed the need for proper maintenance and upgradation of the Khuman Lampak Sports Complex as the State had been hosting many sports events. He informed that the State had started consulting experts to double the seat capacity of Main Stadium and to upgrade its ground.
The Government has been targeting to host matches of big football tournaments like Indian Super League soon, he added.
N Biren further informed that the Government would soon start construction of stadiums in 6 hill districts with an estimated cost of Rs 9 crore each. The construction of the same would be funded by MOBC, he added.
He further stressed the need for creating interest in games and sports among youth to divert their minds from drugs and other related activities. Concluding his speech, he also extended his best wishes to the participating teams.
Youth Affairs and Sports Minister Govindas Konthoujam also stated that Manipur has been one of the leading States in the field of games and sports and added that the State had produced many Olympians.
He continued that the State Government is planning to further promote hockey, with better infrastructure, in all 16 districts of the State. He also informed that infrastructure development of Khuman Lampak Sports Complex would be carried out by consulting experts of the field.
Stating that around 300 hockey players are currently working in different parts of the country, he advised the participating players to play well with much dedication to win the championship and also to achieve success in their lives.
The Chief Minister also took salute of all the participating teams as they marched inside the stadium. An eye-catching performance of Thang Ta was also showcased during the programme.
President, Hockey India Gyanendro Ningombam; Principal Secretary (YAS), SS Chhabra; president, Manipur Hockey Basudev Singh and other officials attended the programme among others.