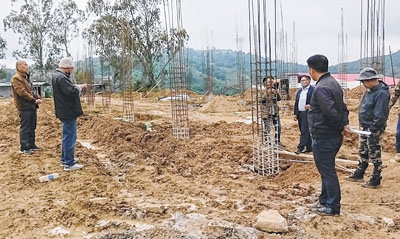 Mungchan Zimik
Ukhrul, May 11: People of Hunphun/Ukhrul have urged all concerned to stop the construction work of Pettigrew College Academic Block at Meizailung as they found the quality of the work unsatisfying and different from the specification mentioned in the sanction order.
The resolution to restrict the construction work was taken after a joint team of Hunphun/Ukhrul village authorities, All Hunphun Tangs Association (AHTA), HKL (Ukhrul student body) and the media inspected the progress of the project.
It might be mentioned that the infrastructure development project of Pettigrew College at Ukhrul district for construction of Academic Block and main gate is being executed under Manipur Minorities and OBC Economic Development Society (MOBEDS) at the estimated cost of Rs 14.18 crore.
The locals of Hunphun/Ukhrul village claimed that the iron bars supposed to be used were 30mm but the same were changed to 20mm and 16mm instead while the number of RCC pillar iron M/s bars was reduced from 12 to 10.
Further, sand used for making concrete cements were substandard and it mostly contained clay and mud which are not fit for building construction.
When interacting with the official in-charge of the project, it was learnt that the works were executed under the instructions of the contractor concerned and the workers were not given the blueprint, they claimed.
It is reported that HKL president Ngaworpei Ragui had insisted the labourers put a signboard in front of the construction site and display the details of the Academic Block and main gate construction.
They further claimed that the size of the double storey Academic Block must be 90.5m long and 36.05m width but the same have also been shortened  by  4-9 feet in both length and breadth.
The building will have five blocks with 19 lecturer rooms, 2 theatres and 4 seminar halls and its estimated cost was Rs 14,98,14,714 and the project had to be completed within 18 months.
The visiting Hunphun/Ukhrul village leaders were not satisfied with the quality of the work and as such it compelled them to take a tough stand to withhold the construction work immediately.
They asked the labourers to inform the contractor concerned about the situation, give detailed reports of the work and to  cease the work until the directions are heeded.
Significantly Chief Minister N Biren recently visited Pettigrew College and assured that developmental works would be taken up at the college.