No new FIRs to be filed till re-examination; those already charged can seek bail In historic order, SC puts on hold sedition law 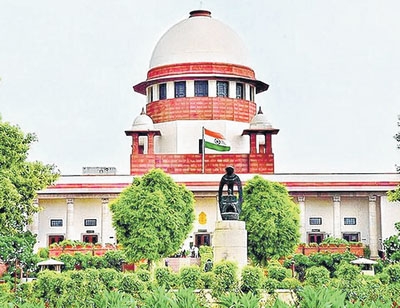 NEW DELHI, May 11
The Supreme Court on Wednesday allowed the Central Government to re-examine and reconsider the provisions of Section 124A of the Indian Penal Code (IPC), which criminalises the offence of sedition.
The Supreme Court, in a historic order putting on hold the colonial-era law, said that till the exercise of re-examination is complete, no case will be registered under IPC Section 124A and added that those already charged under it can approach Courts for bail.
Section 124 of the IPC deals with punishments for sedition offences.
“We have discussed elaborately. We are passing this order. In view of the above, Union of India agrees with the prima facie opinion expressed by the Court that the rigours of Section 124A is not in accordance with the current social milieu," Chief Justice of India said on Wednesday during the hearing in the sedition law case.
‘We hope and trust Centre and State refrain from registering any FIRs invoking Section 124A IPC," CJI said.
The next hearing in the sedition law case is scheduled for Thursday.
Trinmool Congress MP Mahua Moitra, whose petition against sedition law is among those that the Supreme Court is hearing, lauded the order passed by the top Court on Wednesday.
“Victory ! Supreme Court stays Sec 124A- no new cases can be filed, existing cases can apply for bail & release immediately. Thank you to my lawyer Sr. Advocate Gopal Sankaranarayan for his 1 pager which swung the day!," Moitra said in a tweet.
During the hearing of the case, the Centre also told the Supreme Court on Wednesday that cases under Section 124A of the Indian Penal Code (IPC) be registered only when area Superintendent of Police is satisfied with registering the case give reasons in writing.
A cognizable offence cannot be prevented from being registered, staying the effect may not be a correct approach and therefore, there has to be a responsible officer for scrutiny, and his satisfaction is subject to judicial review, Centre told the Supreme Court.
Solicitor General Tushar Mehta, appearing for the Centre, also told the Supreme Court that the Centre has prepared a draft for the reconsideration of the law.
The draft states that an FIR will be registered with sedition charges only if a police officer of the rank of SP says there is a valid reason for the same, Mehta said.
SG Tushar Mehta told the apex Court that as far as pending sedition cases are concerned, gravity of each case is not known, “maybe there is a terror angle, or money laundering. Ultimately, the pending cases are before judicial forum, and we need to trust the Courts".
Centre told the Supreme Court that to pass any order to stay the sedition provisions upheld by a Constitution bench may not be the correct approach.
News18