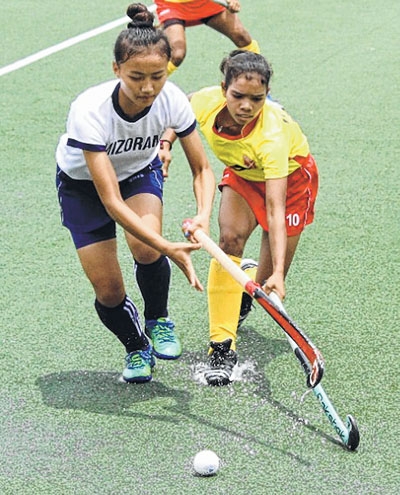 By Our Sports Reporter
IMPHAL, May 12 : Tamil Nadu, Mizoram & Karnataka scripted victory on day 2 of the 12th Hockey India Sub Junior Women National Championship 2022 at Khuman Lampak Sports Complex, Imphal, today.
In the first match of the day, Tamil Nadu sealed  a narrow 1-0 win over Arunachal Pradesh with Anusuya scoring the lone goal in the 28th minute.
The following match saw Karnataka running riot against Telangana.
Karnataka  beat Telangana 15-0 in a one sided match.
Yamuna of the winning team scored the maximum number of goals as she found the opponent's net in the 11, 12', 36', 38, while his team-mate struck three goals (7', 44', 45').
In the last match of the day, Mizoram beat Bihar by 7 goals to nothing, the scorers being Mang Lawmsang (5'), F Lalbiaksiami (10',46'), Lal Tiangchhungi (20', 21', 27') and Lairinpuii (56').
The championship is being organised by Manipur Hockey under the aegis of Hockey India and it  will continue till May 22 .
Altogether 25 teams from different States and Union Territories will be competing in the National event.
Chief Minister N Biren Singh kicked off the 12th championship yesterday.