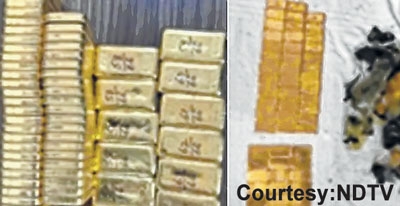 New Delhi, May 13
Revenue Intelligence officers have seized 15.93 kg of foreign-origin gold valued at over Rs 8 crore smuggled through the India-Myanmar border, the Finance Ministry said on Friday.
In an operation code-named 'Gold on the Highway', the Directorate of Revenue Intelligence (DRI) officers acted on specific intelligence mounted surveillance on two oil tankers and a truck travelling separately from Mao, Manipur to Guwahati, Assam.
In the early morning hours on May 12, these vehicles were intercepted simultaneously at different points along the National Highway between Dimapur and Guwahati.
The 15.93 kg of foreign origin gold smuggled through the India-Myanmar border, and valued at Rs 8.38 crore, was seized by DRI officers on May 12 in Guwahati and Dimapur, the Ministry said in a statement. After intensive examination of the intercepted vehicles, 96 pieces of gold biscuits, weighing 15.93 kg, concealed in different parts of these vehicles were recovered. Five persons of the organised gold smuggling syndicate have been arrested and three vehicles were seized in the operation. Further investigations are in progress.
In the last financial year, DRI had seized 833 kg of gold valued at Rs 405 crore during its operations across the country. Of this, in the North-Eastern States, DRI had seized more than 208 kg gold valued at Rs 102.6 crore, smuggled through the highly sensitive India-Myanmar and India-Bangladesh border. PTI