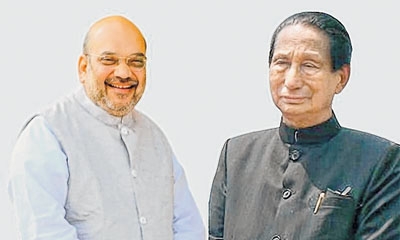 New Delhi, May 14
No further delay. That’s the message around after many months of stalemate and hiccups with regard to the 27-year-old Naga peace talks.
“By now, everyone knows about the Government of India’s commitment to give a solution to the Naga political issue and things are expected at the earliest,” a source said.
In fast-paced developments in the last few days, the Union Government has put the “final and unfinished stages” of Naga peace talks on a faster track.
While key stakeholders NSCN (IM) and NNPG are already in the scene, the core committee of State legislators headed by Chief Minister Neiphu Rio and Y Patton (Deputy CM and BJP floor leader in Assembly) and former CM TR Zeliang are arriving in Delhi by Sunday or Monday. They are likely to meet Union Home Minister Amit Shah.
At the directives of Prime Minister Narendra Modi, Shah is personally monitoring and reviewing things.
Shah had invited veteran Naga leader Dr S C Jamir, a former Governor of Gujarat, and met him on Friday evening.
While one delegation of ten NSCN (IM) leaders are camping in Delhi and have been interacting with AK Mishra, Government’s peace emissary and others; NNPG convener N Kitovi Zhimomi also landed in the capital on Friday afternoon.
As part of the exercise, Shah on Friday evening met veteran Naga leader Jamir.
Sources said, Jamir has made a “few important suggestions” so that things are not delayed further and a final peace pact is inked by all important stakeholders at the earliest.
The meeting was “fruitful”, the source said. Jamir had last month met Prime Minister Modi and held detailed discussions with him.
The Union Government’s representatives met a 10-member NSCN (IM) delegation during the last few days (Thursday and Friday) and tried to impress upon them the urgency to agree to the solution.
Sources said the Union Government has made it clear that there can be no reconsideration of the twin demands of Flag and a separate Naga Constitution as demanded by the NSCN (IM).
In fact, the second meeting between Central Government’s representatives and NSCN (IM) delegation led by VS Atem took place on Friday at the request of the militant group only as they wanted to deliberate on certain issues all over again.
For records, both sides have remained tightlipped so far.
Next two-three days of deliberations between Central Government’s represen- tatives and various stake-holders including NNPG leaders, NSCN(IM) delegation and Core Committee members will be vital.
Home Minister Shah, during his recent visit to Guwahati, had met Naga leaders, including Chief Minister Neiphiu Rio.
The Naga peace talks were kicked off during the tenure of IK Gujral as the Prime Minister. Earlier, his predecessor HD Deve Gowda had met NSCN (IM) leaders late Isak Chishi Swu and Thuingaleng Muivah at Zurich in February 1997 kicking off the parleys.
There have been various complexities in Naga peace parleys unlike the Mizo talks in the mid-1980s.
In October 2019, the parleys had ended but in subsequent periods, it hit roadblocks after the NSCN (IM) raised the twin issues of separate Flag and a Naga Constitution.
Prior to that on August 3, 2015, a Framework Agreement was signed by the then negotiator RN Ravi, now Tamil Nadu Governor, with NSCN (IM). A similar Agreed Position agreement was inked with NNPG, an umbrella organisation of seven Naga militant groups.
The NNPG is desirous of early solution and inking of a final Peace pact.
Signing of a peace pact has become all the more important and urgent as the tenure of the 13th Nagaland Assembly would end soon and elections are due in Nagaland by Feb-March 2023.
The peace emissary AK Mishra, a former Intelligence Bureau senior official, recently held hectic parleys with various Naga political groups and leaders of civil society organisations during his stay in Dimapur in an attempt to sense public mood and iron out differences for an early resolution of issues.    IANS