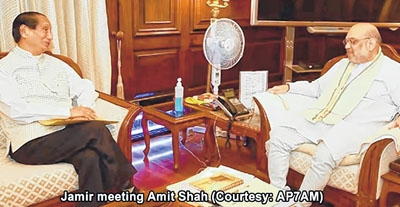 Newmai News Network
DIMAPUR, May 16 : Once again flatly rejecting the 16 Point Agreement and pointing its fingers at former Chief Minister of Nagaland SC Jamir, the NSCN (IM) today said, “SC Jamir is the only living person today who is still kicking around being one of the architects of the 16-Point Agreement.”
In a statement, the NSCN (IM) said that the Indo-Naga history remains alive to testify who is who, and who has played a destructive role that led to this sorry state of affairs "as we find today".
"The root of the never ending Naga political problem lies in the 16-Point Agreement and the only living person who is still kicking around being one of the architects of the 16-Point Agreement is none other than Dr SC Jamir," it said.
The outfit also said that the Nagas have suffered much because of the depths of cruelty and treachery of SC Jamir. "Tragically, the Government of India is turning to this same destructive person seeking his guidance. Significantly, nothing is more annoying for the National Socialist Council of Nagalim (NSCN) when the Ministry of Home Affairs (MHA), Government of India, is hobnobbing with SC Jamir," the NSCN (IM) said in a statement.
According to NSCN (IM), SC Jamir is scheming with the Centre to destroy the very foundation of the Naga political identity that the Naga people have shed blood, sweat and tears over the decades. Needless to say, Jamir has a penchant for creating bloodshed as testified by the pages of the Indo-Naga history, charged NSCN (IM) and added "Naturally, the peace process under ceasefire is something anathema to him."
The NSCN (IM) said that the Indo-Naga political history is alive to the fact that when the 16 Point Agreement was signed and the State of Nagaland was created, the first Indian Prime Minister, Jawaharlal Nehru sensed something missing and made a statement in the Lok Sabha to express his desire to meet AZ Phizo in London. The NSCN (IM) further stated that there was immediate panic reaction from SC Jamir, the then Parliamentary Secretary, Ministry of Home Affairs, Government of India and "wrote to Shilu Ao, the first Nagaland State Chief Minister, dated March 22, 1963: 'Uncle Shilu, what is that the Prime Minister is talking about of meeting Phizo, a terrorist ? If his meeting with Phizo becomes a reality then I will come back home packing my bedding'".
According to the NSCN (IM), Jamir also mentioned that he is capable of more troubles than the hostiles could do. The NSCN (IM) added that Jamir was so determined that the 16-Point Agreement should not be touched.
Ultimately, according to the NSCN (IM), Shilu Ao and colleagues in Nagaland fell in line with Jamir’s threatening letter as they rose against the proposal of Nehru’s meeting with Phizo.
"What followed was that peace could not prevail in Nagaland and many precious lives were lost," it added.
"This same man (SC Jamir) is still alive repeating the same thing he loved most, to defend the 16-Point Agreement," added NSCN (IM).
They also questioned, "Why is the Government of India not willing to learn from history and why is the Government of India giving space to Jamir to block a genuine, honorable and lasting solution to the Indo-Naga political issue?"
The NSCN (IM) then stated that the 16-Point Agreement "which was rejected and condemned by the Naga people years ago can never be brought back as the basis for the Naga political solution".