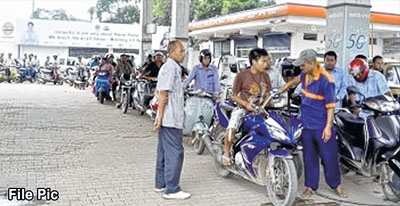 NEW DELHI, May 21
In a step to bring down the fuel prices, the Centre on Saturday reduced the Central excise duty on petrol by Rs 8 per litre and that on diesel by Rs 6 per litre. “We are reducing the Central excise duty on petrol by Rs 8 per litre and on diesel by Rs 6 per litre. This will reduce the price of petrol by Rs 9.5 per litre and of diesel by Rs 7 per litre,” Union Minister of Finance Minister Nirmala Sitharaman announced, pointing out that it will have revenue implication of around Rs 1 lakh crore per year for the Government.
She also encouraged the State Governments to implement a similar cut.  “I wish to exhort all State Governments, especially the States where reduction wasn’t done during the last round (November 2021), to also implement a similar cut and give relief to the common man,” she said.
Rolling out a slew of measures to stem inflation, Sitharaman said, “Keeping in line with @PMOIndia @narendramodi’s commitment to help the poor & common man, TODAY, we are announcing more steps to help our people,” she said.
Here’s a list of announcements made by Sitharaman  on Saturday.
Reduction of Central excise duty on petrol by Rs 8 per litre and that on diesel by Rs 6 per litre.
Subsidy of Rs 200 per gas cylinder (upto 12 cylinders) to over nine crore beneficiaries of Pradhan Mantri Ujjwala Yojana. This will have a revenue implication of around  6100 crore a year.
In addition to the fertilizer subsidy of Rs 1.05 lakh crore in the budget, an amount of Rs 1.10 lakh crore to be provided to further cushion the farmers.
Reduction of  customs duty on raw materials and intermediaries for plastic products where India’s import dependence is high. Import duty on some raw materials of steel will be reduced. Export duty on some steel products will be levied. This will result in reduction of cost of final products.
Measures to improve availability of cement, and through better logistics to reduce the cost of cement.
Hailing the PM Modi Government, Sitharaman stated, “Our Government, since when PM Narendra Modi took office, is devoted to the welfare of the poor. We’ve taken a number of steps to help the poor and middle class. As a result, the average inflation during our tenure has remained lower than during previous Governments.” She said that the Government set a paradigm of welfare even when the country, like the rest of the world,was hit by the pandemic. “Even during the pandemic, our Government set a paradigm of welfare, especially with PM Garib Kalyan Anna Yojana. This is now acknowledged and appreciated the world over,” she said.
“Despite the challenging international situation, we’ve ensured that there are no shortages/scarcity of essential goods. Even a few developed countries couldn’t escape some shortages/disruptions. We are committed to ensure that prices of essential items are kept under control,” Sitharaman said.  Courtesy Indian Express