Take it or leave it moment for NSCN (IM), says Naga leader 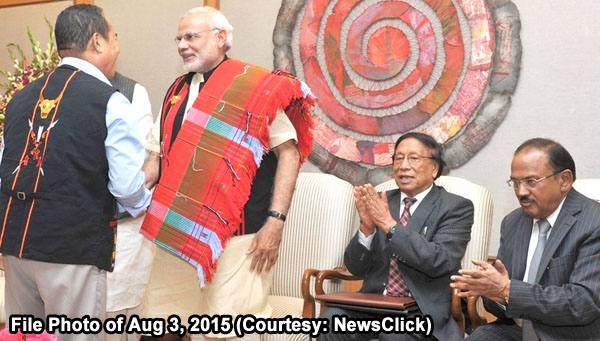 New Delhi, May 25
As things move towards a possible realisation that there has been enough delay and now time to settle for a pragmatic solution and peace, a key Naga legislator Kuzholuzo Azo Nienu says by inking the 2015 Framework Agreement, the potent NSCN (IM) group had "sealed their fate" and virtually endorsed the Constitution of India.
"The moment the NSCN (IM) signed the August 3, 2015 Framework Agreement...sealed their fate vis-a-vis Constitution of India. It was signed by Interlocutor RN Ravi on behalf of the Government of India and in other words this pact is itself within the framework of Indian Constitution," Azo Nienu told IANS.
He explained, "if it was already within the Indian Constitution, one thing is certain Naga Sovereignty is ruled out". It also rules out other demands like 'integration' of all Naga contiguous areas and also a separate Flag. In this context, he said the Core Committee of Nagaland State legislators and Ministers -Chief Minister Neiphiu Rio, Deputy CM Yanthungo Patton, former CM TR Zeliang and he as NPF legislature party leader would work out future plans and strategies to meet NSCN (IM) leaders and convince them to see reason and accept an early solution.
Former Nagaland Chief Minister SC Jamir has also recently maintained that it ought to be understood properly that all 'agreements' made by the Government of India with both the groups, NSCN (IM) and NNPGs, have to be "incorporated in the Constitution of India". "When things are so clear, so my moot point is in the Naga spirit, I think they (Naga underground leaders) should adhere to the signature they have appended willingly and knowingly in the agreement," Jamir had told IANS.
Notably, on May 20, the NSCN (IM) stated in a press release in Dimapur -- "We understand the pressing situation where people are over burdened with multiple factions and taxations and which can only see the end once early Naga solution materializes". It also asserted that it would be erroneous to imply that the NSCN (IM) is opposed to an "early solution". Recent developments have rekindled hope of an early solution and more so as elections in Nagaland are due by Feb-March 2023.
Azo Neinu also said in the given context, the stance taken by the Government of India is to be appreciated as they have decided to allow the use of the Naga Flag for cultural programmes. "In fact, the Prime Minister (Narendra Modi) or Home Minister (Amit Shah) are willing to visit Nagaland and also hoist the Naga flag for any cultural event. I must appreciate as a regional politician often taking a stance against BJP but I can tell you, the Government of India has also gone all out to accommodate the request and demand of Naga leaders".
Therefore, he said, it is high time -- "for NSCN (IM) to say whether they take it or leave it". The NPF legislature party leader said his party wants an early solution and also passed a resolution on the issue in a meeting at Kohima on Tuesday (May 24).
Sources said during separate meetings with peace emissary AK Mishra and one key NSCN (IM) leader in Delhi recently, the Core Committee led by Chief Minister Rio also made it clear that a solution to the long pending Naga issue is a must to end a culture of intimidation and extortion in Nagaland.
On this, Azo clarified further -- "We told them how long can Nagas continue with extortion ?" In fact, the extortion menace is almost a mini industry for the disgruntled elements in Nagaland and Naga inhabited areas. Earlier this year, Assam Rifles DG, Lt Gen PC Nair had also said that wherever AFSPA was diluted or withdrawn, the areas saw 'rise in extortion'.
In fact, even NSCN (IM) and other Naga groups under NNPGs have also expressed concerns about extortion in the past. In an election campaign speech in Naga-dominated Senapati in Manipur, Chief Minister Rio also had spoken against extortion virtually echoing the concerns flagged off by former Nagaland Governor RN Ravi. Rio had said in February this year, "There should be no violence in our society.... There should be no extortion," and went on to add, "The burden is too much."
"Burden is so much on the common people. We have to seriously think, otherwise there is no future". It is worth mentioning that the NSCN (IM) has convened a key meeting of all its key leaders and regional representatives on May 31 to decide on the fate of Naga peace talks which had begun during the stint of IK Gujaral as Prime Minister in 1997.
It is expected the Core Committee of State legislators led by CM Rio will also meet NSCN (IM) top guns including general secretary Thuingaleng Muivah by May 28-29 or before May 31. RN Ravi as the Interlocutor and Nagaland Governor had made significant contributions in the peace process. In fact, Azo says, "Even NSCN (IM) leaders maintain that to an extent the offer from Ravi for Naga Territorial Councils in Naga inhabited areas of Manipur and other North Eastern States was a good offer. It was perhaps better than what present emissary AK Mishra is making now.
"Ravi had proposed that Central funds would be provided directly to the territorial councils; but in new methodology, the emissary (Mishra) has said funds would be routed through respective State Governments. This discontentment too will be hopefully addressed now," Azo added.  IANS