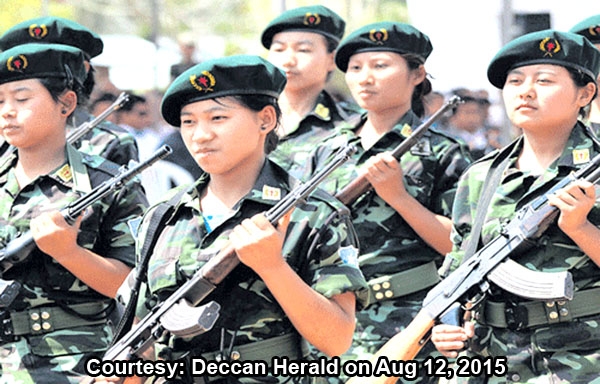 Kohima, May 27
The NSCN (IM) on Friday advised the elected leaders of the State to resist the temptation of going overboard with the Naga political issue and from further creating confusion at this sensitive juncture.
“While we appreciate the enthusiasm shown by the State’s elected political leaders, it would be tantamount to overstepping their role as facilitators when they start jumping beyond their assigned role, making bewildering statement on the Naga solution. This will in no way help build the desired atmosphere as expected from them,” an official update from the NSCN (IM) said.
The group said the Naga issue is not something that has cropped up recently but is over six decades of struggle. According to them, the Nagaland State BJP Ministers and other party leaders are not able to fully understand the complexities and intricacies involved in the political struggle and is simply allowing themselves to be carried away by their “election syndrome”.
“Nagas have tasted the bitter fruits of the past accords/agreements and there is no way that we should make another blunder to allow ourselves to be flattered again. Naga issue is sensitive because it encompasses the historical and political rights to exist as a free people. This demands that the Naga solution be an issue-based solution guided by the principle based movement that has lasted for over six decades,” said the NSCN (IM).
While also appreciating the enthusiasm shown by the elected leaders, the group cautioned against overstepping their role as facilitators.
The group said they have recently noticed some outrageous statements on the Naga political solution with reference to Framework Agreement, Naga National Flag, Constitution and integration from Nagaland BJP Ministers and NPF political leader using un-parliamentary and intemperate language.
The NSCN (IM) said the Naga political issue is something nobody wants to prolong as it is a huge burden, loaded in the heads of the Naga people, including the group.
“Irrespective of who we are as individuals or party, we have to admit that Naga political issue is getting more sensitive by the day and, for many, it is an extremely emotional experience to say the least. This demands careful handling without resorting to derogatory outbursts with rhetorical embellishments,” the group said.
The NSCN (IM) also said that it signed the Framework Agreement, guided by the intuition to safeguard the sovereign rights and dignity of the “Nation”. They added, “This is the reason why we have stood our ground and never for other vested interests as wrongly perceived and projected recklessly to jeopardize the sanctity of the Naga issue.”
The group went on to say that it is “very amusing” why the Nagaland BJP Ministers and other party leaders are “spitting venom” against them. Despite the deadlock-like situation, the NSCN (IM) stands for exploring every available means to find the meeting point towards the Naga solution, it assured.
Further, it said that no amount of efforts will go wasted if the negotiating parties are equally determined to find the elusive solution as mutual understanding and respect should be the driving force to take the stakeholders to the common ground.
“What is of interest to the NSCN is if the loud rumble of the State BJP and NPF leaders is done with the blessing of their high command or the rumble is a mere reflection of an unstoppable juggernaut,” it questioned.
They said the NSCN will not be cowed down into submission under the relentless campaigns and will come to terms with the Centre when it is way too short of coming up to the common target of “honourable and acceptable settlement to both the parties”.
East Mojo