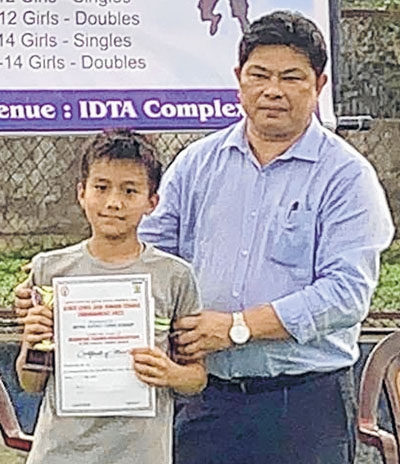 By Our Staff Reporter
IMPHAL, May 4 : Soham Keisham won as many as three medals in the State Level Sub-Junior Tennis Tournament which was organised by the IDTA Tennis Academy under the aegis of Manipur Tennis Association from May 1 till yesterday at IDTA complex, Lamphelpat.
Soham managed both the singles titles in U-12 and U-14 competitions and doubles title in the U-12 competition to soak all the limelight in the three day tournament.
Soham Keisham clinched the U-12 boys singles title beating Th Kishan 4-0 4-1 as Yoihenbi beat Jayshree 4-1 4-1 to claim the girls crown.
Soham then sealed the U-14 boys singles title with a 4-2 5-3 win over Lanchenba in the final while Hensana won 0-4 4-2 4-2 over Angelica to take the girls crown.
U-10 boys singles title on other hand went to Chingkhei who beat Paari Sharma 4-0 4-1 in the final while Y Gucci earned the girls title beating Masileima 4-2 4-0 in the final.
In the U-12 boys doubles, Soham paired up with Yoihenba to win his third title as the pair beat Chingkhei and Bhavin pair 4-2 4-2 in the final. The girls title meanwhile went to the Damei and Yoihenbi pair who eased past Freya and Masileima 4-0 4-0.
Kovidh and Lanchenba were crowned U-14 boys doubles champions as they cruised to 4-2 4-1 win over Kishan and Ryan in the final as Dameli yet again won the U-14 girls doubles title with singles champion Hensana after a 4-2 4-1 win over Angelica and Jayshree in the final.