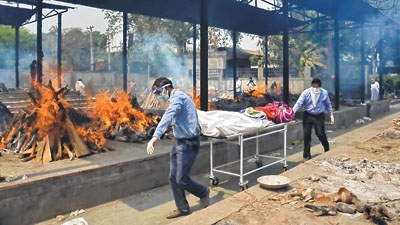 NEW DELHI, May 5
India reported 4.7 million excess deaths between Ja-nuary 1, 2020 and December 31, 2021, the World Health Organization (WHO) said on Thursday, releasing new estimates on the death toll of the Covid-19 pandemic, which it said claimed more than three times the number of lives than officially recorded worldwide – a total of approximately 14.9 million fatalities.
“These sobering data not only point to the impact of the pandemic but also to the need for all countries to invest in more resilient health systems that can sustain essential health services du- ring crises, including stron-ger health information systems,” said Dr Tedros Adhanom Ghebreyesus, WHO director-general in a statement.
During the period, for which India was estimated by WHO as having recorded 4.7 million deaths due to Covid-19, directly or indirectly, the country recorded an official death toll of roughly 520,000.
The WHO data showed that till August 2020, a period when the country had mostly been under lock-down that began in late March, there were approximately 62,000 fewer deaths. Deaths began to rise from September, coinciding with the first waves in many States. More than half of the excess deaths, at 2.7 million, took place during the peak of the second Nationwide wave in the months of April, May and June last year.
“WHO is committed to working with all countries to strengthen their health information systems to gene- rate better data for better decisions and better outcomes,” Ghebreyesus said.
Excess mortality, WHO said, is calculated as the difference between the number of deaths that have occurred and the number that would be expected in the absence of the pandemic based on data from earlier years.
Most of the excess deaths (84%) are concentrated in South-East Asia, Europe, and the Americas. Some 68% of excess deaths are concentrated in just 10 countries globally, the world health body said.
Middle-income countries account for 81% of the 14.9 million excess deaths (53% in lower-middle-income countries and 28% in upper-middle-income countries) over the 24-month period, with high-income and low-income countries each accounting for 15% and 4%, respectively.
India has contested the numbers and released death numbers from its Civil Registration System earlier this week. Those numbers, which are in sync with India’s stated death toll, are of actual deaths, the Planning Commission’s Dr VK Paul, one of the people in charge of India’s response to Covid-19 said, adding that there’s no need to resort to models to arrive at the death toll when actual numbers are available.
In a statement, the Union Government rejected the WHO estimates, saying that it objected to the “process, methodology and outcome” of the  “modelling exercise”. “…WHO has released the excess mortality estimates without adequately addressing India’s concerns,” a statement by the government said.
Referring to WHO’s use of models for the projection, it said: “India had also informed WHO that in view of the availability of authentic data published through Civil Registration System (CRS) by Registrar General of India (RGI), mathematical models should not be used for projecting excess mortality numbers for India.”
Hindustan Times