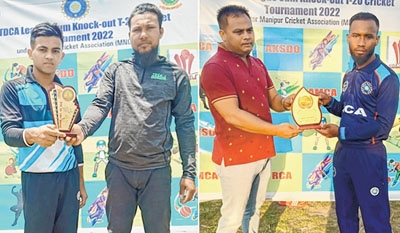 By Our Staff Reporter
IMPHAL, May 6 : AMCA, Moijing secured a 17 run victory over CAL, Masjid Road as RCA, Tairen Makhong cruised to third straight victory crushing SYDO, Sambrukhong by 141 runs in the 4th TDCA League-cum-Knock-out T-20 Tournament organised by Thoubal District Cricket Association at Thoubal Moijing playground today.
In the 8th match of the tournament, AMCA posted a total of 104 runs for 8 in allotted 15 overs and held CAL to 87 for 8 for the second win in four matches having beaten SYDO earlier on April 30.
After being put to bat first, Naeem added 24 runs to AMCA's tally before Yahiya added an unbeaten 29 off 22 balls.
The innings saw Aneesh of CAL picking up four wickets for 19 runs in his spell of 3 overs but his effort went in vain as they faltered badly in the chase.
Nawaj Sharif, Imtiyash and Zour Rahaman also managed a wicket each in AMCA innings.
Nawaz was the highest scorer for CAL in the chase with 19 runs in his name while Sharief followed with 11 runs as other batters fell cheaply before they slumped to 87 for 8.
AMCA's Sushil (2/5 in 3 overs), Naeem (2/10 in 3 overs) and Pravesh (2/21 in 3 overs) bowled extremely well in this innings to exert a strong pressure on the CAL line up.
Naeem who added 24 runs and managed two wickets was adjudged man of the match.
Meanwhile in the second match of the day and tournament's 9th match, RCA rode on Syeed's quickfire 95 off 46 balls and unbeaten performance from Sameer (35 off 18 balls) and Aqueel (9 off 5 balls) to stack up  commendable total of 189 runs for 5 wickets in 20 overs after winning the toss.
Zamir (20) and Rajak (12) also managed double digit runs for RCA in this innings which saw Sharif Alam of SYDO enjoying a three wicket haul for 36 runs in 4 overs.
Hefajuddin and Ruhit of SYDO also picked up a wicket each in this innings before they were bowled out for just 58 runs within 13.4 overs as Naeesh wrecked havoc by snatching four wickets for 4 runs in 1.4 overs after Saba Khan and Aqueel fetched two wickets each to put skid on SYDO batters. Only Raeesh with 14 runs was the only double digit scorer for SYDO in the chase.
Syeed Hussan who was 5 runs away from hitting a ton was named man of the match.
Tomorrow's matches
RCA vs CAL (Morning); SYDO vs AKSDO (Afternoon)