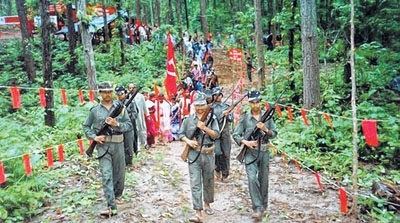 Dantewada, May 7
Responding to the Chhattisgarh Government’s proposal, the outlawed Communist Party of India (Maoists) has shown willingness to hold peace talks with the Bhupesh Baghel-led dispensation, but also set several conditions, including the release of their jailed leaders and withdrawal of security forces from strife-torn areas.
However, a State Minister said talks would be held, if any, only unconditionally.
The development comes nearly a month after Chief Minister Baghel said that his Government was ready to hold talks with the rebels if they expressed faith in the Constitution.
Chhattisgarh is one of the worst Naxal-affected States in the country.
In a statement purportedly issued by Maoists and circulating on social media since Friday, the outlaws questioned the Chief Minister’s “double standards” saying that on the one hand he offers to hold talks, while one the other hand air strike is allegedly being conducted (in Bastar).
The CM should clarify who gave permission for the recent aerial strike, the Maoists asked.
The two-page statement was issued in the name of Vikalp, a spokesperson of the Dandakaranya Special Zonal Committee (DKSZC) of Maoists, which had been instrumental in executing several deadly attacks in south Bastar, including the Jhiram valley attack in Bastar district on May 25, 2013, in which top congress leaders were killed.
Referring to the Chief Minister’s statement about the Constitution, the banned outfit said the Governments had been violating the constitutional rights of the people.
The Governments have been violating rights bestowed on Gram Sabha under PESA (Panchayat Extension of the Scheduled Areas Act) and Fifth Schedule of the Constitution, it claimed.
“Our response to the talk offered by the CM is that we are always ready to hold a dialogue on the condition that the Government creates a conducive environment for it,” it said.
The conditions set by Maoists for talks include withdrawal of ban on the party and its frontal organisations, opportunity to work freely, stopping aerial strike, removal of camps of security forces and withdrawal of forces from strife-torn areas and release of their jailed leaders for talks, the statement said.
While responding to the demands, CM Baghel reiterated that if Maoists express faith in the Constitution then his Government is ready for talks with them at any platform.
"Our Government won hearts of tribals with its schemes resulting in pushing Naxals on the backfoot," Baghel said while talking to reporters in Surajpur district on Saturday.
Reacting on the conditions set by the Maoists, State Home Minister Tam-radwaj Sahu said here that talks would be held only unconditionally.
Last month, the ultras had claimed that security forces had conducted air strikes using drones to target their hideouts in South Bastar, a charge denied by Bastar police.
Bastar range police in a statement had claimed that Maoist allegations were part of the propaganda by Maosit leadership to mislead the local population with an unrealistic hope to regain their lost ground in Dandakaranya region. PTI