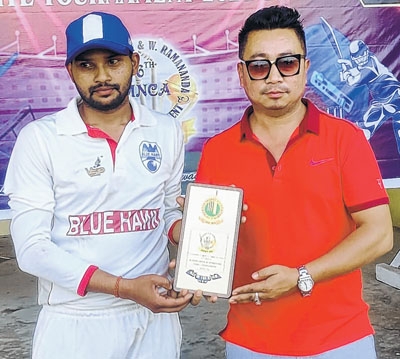 By Our Staff Reporter
IMPHAL, May 7 : Blue Hawk, Khurai registered a 3 wicket win over CHAMP Cricket Club, Khagempalli via DLS method in the 6th W Prahlada and W Ramananda Elite Tournament organised by the Manipur Cricket Association at Luwangpokpa Cricket Stadium, Luwangsangbam.
CHAMP CC, despite a half century knock from Moirangthem Thomas bundled out for 176 in 37.5 overs and Blue Hawk were 101 at the cost of 7 wickets in 17 overs before rain stopped the play and DLS method handed the Khurai team the second Group B league stage win.
In the game that mark the resumption of the tournament after it was put on hold for days due to rain, CHAMP CC were put under pressure from the beginning and were reduced to 30 for 5 within 11.2 overs as Ningombam Jackiechan Singh removed the openers, Samir (1) and Chingangbam Bonny (7) cheaply before Jitendra Bishan Thakur trapped Sougrakpam Shangkar lbw for 8 and bowled out Leikhram Johny Singh for 1 and Sunil Salam dismissed Lairenjam Ansh Singh for 1.
Jitendra Bishan made further inroads removing Md Sultan Karim for golden duck the very next ball after Johny Singh departed and completed his four wicket haul in the 14th over removing Md Sharoz Khan for 5-ball duck.
Nitesh Sedai who came in for the second wicket managed to anchor well and had a brief stay with Thomas Moirangthem before he went off for 32 off 42 balls for the 8th wicket to Sunil Salam.
After being reduced to 58 for 8 in 18.1 overs, M Thomas resurrected the innings by adding 51 off 56 balls to take the tally past the 100 run mark.
Thingbaijam Nicholson then contributed 29 and Md Ahsanul Kabir added unbeaten 33 as the innings wrapped up for 176 all out in 37.5 overs.
Needing 177 for the win, Blue Hawk had to see seven batters lost for 101 runs in 17 overs before rain interrupted and DLS method was used to decide the winners.
The Khurai side too faced stiff resistance from CHAMP CC bowlers and were reduced to 13 for 1 with Gautam Soubam holing out for 3 to Lairenjam Ansh off Ahsanul third delivery in the third over.
Wakambam Samson (11), Sanatomba (16), Nongthom-bam Ajit (3), Laishram Ronson (7), Jitendra Bishan Thakur (5) and Sunil Salam (1) also fell cheaply as Shangkar Sougrakpam (3/19 in 4 overs)  and Thingbaijam Nicholson (2/14 in 2 overs) ripped through the line up.
Amom Guniram (33 off 30 balls) and Ningombam Jackiechan (0) were unbeaten on crease as rain stopped play.
Jitendra Bishan Takhur who claimed four wickets and added 5 runs in Blue Hawk's tally was adjudged man of the match.
Al-Ameen, Lilong will play WYC, Wangkhem in the next match tomorrow.