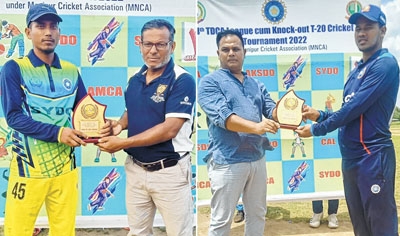 By Our Staff Reporter
IMPHAL, May 7 : RCA, Tairen Makhong cruised to fourth win in the 4th TDCA T-20 Tournament beating CAL, Masjid Road by 69 runs today while SYDO, Sambrukhong beat AKSDO, Khangabok by 3 wickets for the third win in five matches of the double league tournament.
RCA, who posted a massive 141 run victory against SYDO yesterday, extended their winning streak thanks to Sameer's unbeaten 24-ball 74 as the team stacked up 186 runs for 6 in allotted 20 overs before bowling out CAL for 117 runs in 19.4 overs.
After being put to bat first, RCA started slowly with Imaran (34 off 36 balls), Zameer (14 off 11 balls), Syeed Hussain (14 off 17 balls), Rohit (14 off 15 balls) playing their part before Sameer blasted 74 off 24 balls to inspire a massive win. Aqueel 13 was also unbeaten in the innings which saw Nawas Sharif, Imtiyash, Ziour Rahman and Sharif of CAL claiming a wicket each.
In the chase, CAL batters saving Sharif 26, Nawas Sharif 28 and Aziz unbeaten 26 fell easy prey and eventually wound up for 117 runs all out.
Iliyash (3/17) and Afzal (3/11) of RCA shared three wickets each in this innings to break the back of CAL batting line up as Aqueel bagged a wicket for 8 in 2 overs.
Sameer MK who hit a half century was named man of the match.
Elsewhere in the afternoon match, SYDO chased down the 99 run target set by AKSDO for 7 in 19.3  overs to keep their final hope alive. It is the second loss for the Khangabok to SYDO, having lost the opening match by 1 run in the first leg.
AKSDO, after electing to bat first, could gather 98 runs for 9 in 20 overs as batters faltered badly and SYDO's Rafik had an impressive bowling performance to snare four crucial wickets for 13 runs in 4 overs.
Thoiba (15), Kadamjit (15), Jiban (17) and Akash (17 not out) were the significant run contributors for AKSDO today in the innings before Rafik (26),  Riyajuddin (24), BM Irfan (19) steered SYDO to 3 wicket win with 3 balls left to play.
Kaiku was the most successful bowler for AKSDO as he fetched two wickets for 10 runs in 3 overs while Sanjit, Kadamjit and Rohit managed a wicket each.
Rafik who produced an all round performance was adjudged man of the match.
Tomorrow's matches
RCA vs AMCA (Morning); CAL vs SYDO (Afternoon)