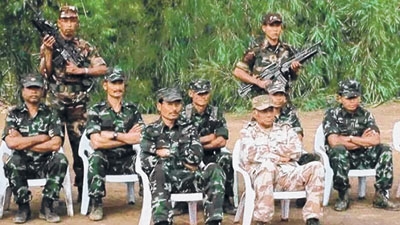 Guwahati, May 7
Proscribed rebel outfit United Liberation Front of Asom-Independent (ULFA-I) is said to have killed two of its cadres for allegedly “spying” on the outfit at the instruction of Assam Police.
The two cadres were identified as Dhanjit Das alias Roopak Asom and Sanjib Sarma alias Rishav Asom.
Dhanjit Das hailed from lower Assam’s Barpeta town while Sanjib Sarma was a resident of Baihata Chariali in Kamrup district.
In a statement released on Saturday morning, ULFA (I) said that the outfit has awarded death sentence to two of its cadres; Dhanjit Das and Sanjib Sarma at its camp in Mynamar for spying on the rebel group.
“Dhanjit Das alias Roo-pak Asom tried to escape from the transit camp of the outfit on April 24. He was captured by a team of ULFA (I) rebels on April 25.  After he was captured, Dhanjit confessed to the interrogating team of the ULFA (I) that he provoked some other cadres of the outfit to flee the camp. He also confessed that he had provided some confidential information to the Assam Police,” the ULFA (I) statement read.
The ULFA (U) further mentioned that another cadre Sanjib Sarma joined the banned outfit as a spy of the Assam Police and he confessed about the entire incident to the leaders of the outfit.
The ULFA (I) has also released a video, in which the duo confessed that they had joined the outfit on the instruction of Assam police.
Earlier, the ULFA (I) claimed that the Assam Police had planted some youths in the organization “to divide and weaken it”.
Revealing the alleged plan of the Assam Police, the outfit also claimed that several youths have been sent to join the organization as its cadres and later spy on the outfit.
Earlier in another video released by ULFA (I), Sanjib Sarma said that he had joined the outfit at the instruction of the Joint Commissioner of Police (JPC) Guwahati, Parth Sarathi Mahanta.
“I was told by senior Assam police officer Parth Sarathi Mahanta that ULFA (Independent) is involved in the killing of my brother. Mahanta asked me to join the ULFA and to monitor their camps and their location. The officer also asked me to take revenge for my brother’s killing and promised Rs 1 crore if I succeed in this mission,” Sarma said. NE Now