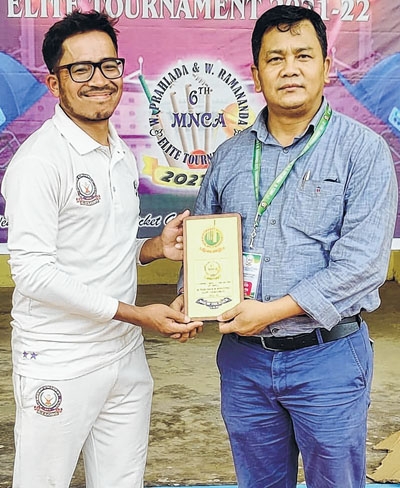 By Our Staff Reporter
IMPHAL, May 8 : Md Bashir Rahman shone with a half century as Al-Ameen defeated WYC, Thoubal Wangkhem by 7 wickets for the second Group B win in three matches of the ongoing 6th MNCA W Prahlada and W Ramananda Elite Tournament today at Luwangpokpa Cricket Stadium, Luwangsangbam.
WYC stacked up a moderate total of 177 for 8 in allotted 40 overs but Al-Ameen took just 32.3 overs to post a winning 178 with 7 wickets left in hand as batters played cautiously.
WYC were reduced to 36 for 2 with Sherokumar (7) edging to Al-Ameen wicket keeper N Md Nasirshah Alam bowling in the fourth over and Wangkhem Shamungou bowled out by Habibullah Ahammed for 16.
But Thokchom Momocha (30) and Priyobarta (29) forced a 52-run partnership for the third wicket before Momocha was trapped lbw by Md Nasirshah Alam in 24.1 overs as the scoreboard read 88.
WYC slump continued and were reduced to 135 for 7 as Habibullah went on to remove Priyobrata (29), Tayenjam Tomba (17) and Huirongbam Biteswor (4).
Late on Thoudam Rohit (14) and Mangi Sharma Gotimayum (37 not out) gathered 50 runs for the 8th wicket before Thoudam Rohit was out for obstructing the field in the 5th delivery of the final over.
Eventually, Habibullah Ahamad returned with the best bowling figures of 4/41 in 8 overs as Nongjaimayum Md Nasirshah Alam fetched 3 wickets for 32 runs in 8 overs which contained one maiden over.
In reply, Md Basir Rahman (59 off 53 balls) and Nawaz (42 off 54 balls) rotated strikes and set the momentum of a big win by gathering a total of 112 runs in 17.3 overs before  Laksmon got the breakthrough removing Nawaz and completed his double removing Md Basir Rahman in the last ball of the same over.
Leg break bowler Laksmon also removed Muhammed Al Bashid for 3 in the 20th over but Mohammed Mustque (40 not out off 55 balls) and Nongjaimayum Md Nasirshah Alam (20 not out off 27 balls) held on to guide Al-Ameen to 178 in 32.3 overs.
N Md Nasirshah Alam of Al-Ameen who enjoyed a three wicket haul and added 20 runs in the chase was adjudged man of the match.
FORCE will play PTRC in a Group A league match tomorrow.