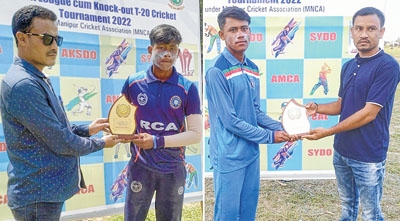 By Our Staff Reporter
IMPHAL, May 8 : RCA cruised to their fifth straight win of the 4th TDCA League Cum Knock Out T-20 Tournament beating AMCA by 46 runs in the second leg at Moijing playground.
RCA gathered 156 runs for 5 in 20 overs after electing to bat first and bowled out AMCA for 110 runs in 19.5 overs to secure the big win today.
Zameer shone with a knock of 42-ball 52 in RCA's innings as Sameer added an unbeaten 39 off 20 balls. Rohit (26) and Razak (13) also contributed in this innings which also saw Sushil and Baboy of AMCA claiming two wickets apiece and Pravesh fetching one wicket.
In the AMCA chase, RCA bowlers put in a concerted effort to give the batters a tough time and eventually the Moijing team skittled out for 110 runs despite Sushil's unbeaten 38 off 36 balls.
Baboy also managed a run a ball 26 and Yaheeya added 11 off 18 balls in a lost cause as Aziz Mirza, Aqueel and Afzal  shared two wickets each.
Zameer who topscored for RCA was named man of the match.
Meanwhile in another second leg match between  SYDO, Sambrukhong and CAL, Masjid Road, Sharif's half century knock (57 off 54 balls) for CAL went in vain as the team were held just 2 runs away from win.
Opting to bat first, SYDO posted 150 runs total losing 8 wickets thanks to significant knocks from Irfan (31), Raees Raza (27 not out), Rafik (12), Mudasir (13) and Riyajuddin (12). Hamza emerged as the pick of the CAL bowlers in this innings as he notched up three wickets for 20 runs in four overs while his compatriots, Akip and Adif picked up a wicket each.
Needing 151 for the win, CAL started positively with Sharif scoring 57 off 54 balls and MM Nawaz adding 32 of 24 balls but had to see out the innings on 149 for 6 as SYDO bowlers maintained a good economy.
Hefajuddin bagged two wickets for 37 runs in this innings as BM Irfan and Rafik claimed a wicket each.
Sharif of CAL was named man of the match.