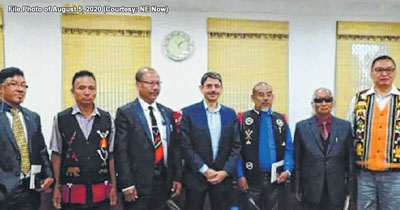 New Delhi, May 31
The locals-outsiders debate, a long-lasting feature in the North East and also in Nagaland, has taken a new twist and somewhat ugly turn.
On Monday, the umbrella Naga National Political Groups (NNPGs) comprising seven militant groups operating in an unprecedented move openly directed their tirade against the NSCN (IM) virtually tagging them as 'outsiders', tenants, in the State of Nagaland.
"Nagaland today is a land where tenants, with Government of India's help, dream to be landlords through heckling, harassing and brutalising the owners with symbolic tools like Integration, Flag, Constitution, Pan Naga Hoho," the NNPG Working Committee said in a statement issued late Monday.
The NNPG, which is formally headed by its convener N Kitovi Zhimomi, is now more than keen to ink an early solution and final peace pact with the Central Government.
It had signed an Agreed Position with the Centre on November 17, 2017 in the presence of former Naga peace talks negotiator RN Ravi.
"Since 1997, Nagaland has lost two generations and counting," the NNPG statement said in reference to the delay in finalising the final pact between the Centre and the NSCN (IM).
Such a strongly worded statement issued just a few hours before NSCN (IM) general secretary Thuingaleng Muivah holds a key meeting with his colleagues and senior leaders was a bit surprising. However, it is not clear whether such a statement can sustain any pressure on the NSCN (IM) leadership.
Various Naga organisations, student bodies and individual leaders, including veteran politician SC Jamir, the only surviving signatory to the 1960 Statehood Agreement, have already mounted pressure on all stakeholders for an early solution.
In the statement, the NNPG added: "Immediately after 1988 crisis (split in NSCN), having warmly welcomed by hospitable Nagas into Nagaland, southern Naga (NSCN-IM) leaders did not own a hut then. Today, in the name of political dialogue and extortion these people have able to purchase farmlands in Dimapur, Chumukedima and Peren districts."
"Constructing mansions and other assets in Dimapur, Ukhrul (in Manipur), in India and abroad. With such grandiose luxury accumulated over three decades, it is very easy to hide behind powerful slogans like greater Nagalim, Flag, Constitution, to soak in the wealth of Nagaland for few more decades," it said while insinuating that deliberate ploys are being deployed to delay the peace talks.
The talks began in 1997 during the stint of IK Gujral as Prime Minister.
The first backroom channel of communication with Naga militants was opened by former Prime Minister PV Narasimha Rao.
HD Deve Gowda formally met NSCN (IM) leaders Muivah and Isak Chishi Swu (now deceased) in Zurich in February 1997. The first ceasefire was announced for six months in August 1997 during the tenure of Gujral.
Considerable progress was made by the Atal Bihari Vajpayee Government while nothing much moved between 2004 and 2014 when Manmohan Singh was at the helm of affairs.
The incumbent Narendra Modi Government has put the entire parleys into a faster track and first inked a Framework Agreement with the NSCN (IM) in 2015. The pact was inked months before aging Isak Chishi Swu expired.
Swu hailed from Sema tribe of Nagaland, the same as Kitovi's tribe. Swu was NSCN (IM) chairman and the group got the name 'IM' faction from his first name Isak.
However, the operational leadership of the NSCN (IM) generally remained with Muivah over the years. He is a Tangkhul Naga and the community has substantial presence in hilly region of Manipur.
Muivah's fellow tribeman Rishang Keishing, a veteran Congressman, also had become the Chief Minister of Manipur.
In the context of Agreed Position signed on November 17, 2017, the NNPG said they did not require any "camera flashlights, no hype or hoopla" unlike August 3, 2015 when the NSCN (IM) signed the Framework Agreement with Interlocutor Ravi in the presence of Prime Minister Modi.
"That afternoon (November 17, 2017), the Naga delegation experienced a solemn moment with thankful hearts, sat at a round table when a historic document was signed. The Centre recognised the political and historical rights of the Nagas to self determine their future in consonance with their distinct identity," the group added.
"God never fails. This has an unlimited political horizon to begin the negotiations."
Retired IAS officer Khekiye K Sema in a newspaper article also suggested that the "Nagas of Nagaland have no choice but to take a look back at our history".
He wrote the NSCN (IM) is "spearheading the negotiation with the Government and trying to decide the fate of the Nagas of Nagaland without letting us know exactly what our future is going to look like".