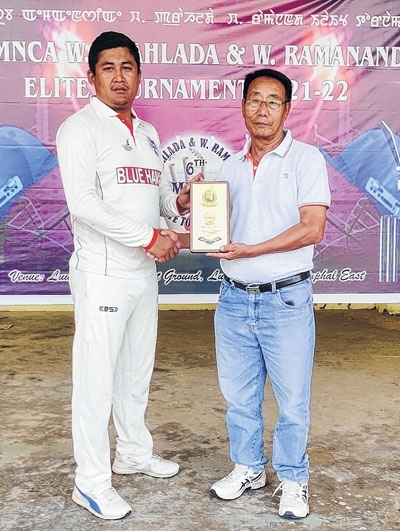 By Our Staff Reporter
IMPHAL, Jun 9 : Blue Hawk, Khurai Lamlong got the better of WYC, Thoubal Wangkhem by 10 runs in Group-B league match of the 6th MNCA W Prahlada & W Ramananda Elite Tournament at Luwangpokpa Cricket Stadium today and retained their position as the best performing team of the group with three wins and one lost (6 points) so far.
Electing to bat first, Blue Hawk set a paltry target of just 93 in the 40 over match but the figure was big enough for the Khurai side as their bowlers put on a stunning show in the 2nd innings.
The first innings also saw WYC delivering a fine bowling performance as they dismissed the openers of their opponent in the first 10 overs (50-2 in 9.4 overs).
The openers of Blue Hawk - Becker  Roy who scored 17 runs and  skipper Wakambam Samson Singh who struck 13 runs were dismissed for LBW by Huirongbam Biteshwor Singh and Khundrakpam James Singh respectively.
H Biteshwor of the Thoubal team also clinched another three wickets by giving away 23 runs in his 7.2 overs but it was his team-mate Wangkhem Laksmon Singh who fell the maximum wickets (five wickets) by giving away 22 runs  in his eight overs spell.
The maximum run scorer of Blue Hawk was Sanatomba who hit 23 runs  in 19 balls but he too was stumped by H Biteshwor in 13.3 overs.
The first innings ended in 23.2 overs with a target set of just 93 runs as all  the remaining batsmen of the Khurai side, except Ningombam Jackiechan who scored 14 runs, couldn't hit a double-digit score in the remaining portion of the innings.
Despite the low target, the Thoubal side ended with another disappointment as Gautam Soubam of Blue Hawk dismissed six  wickets and gave 9 runs in just 4.4 overs while his team-mate Sunil Salam and Mutum Pritam Singh fell one wicket each.
The Thoubal side lost both its opener in the first five overs (4.2 overs) by making only 15 runs and were bundled out at 82 in the 27th over.
The only three batsmen of WYC who hit a double digit runs were Wangkhem Shamungou Singh (20 runs in 55 balls), Priyobarta Moirangthem (22 runs in 33 balls) and Wangkhem Laksmon Singh (not out and hit 12 runs in 31 balls).
Gautam Soubam of Blue Hawk was declared the man of the match.
WYC is at the bottom of the Group-B table as the team have lost all their three matches.