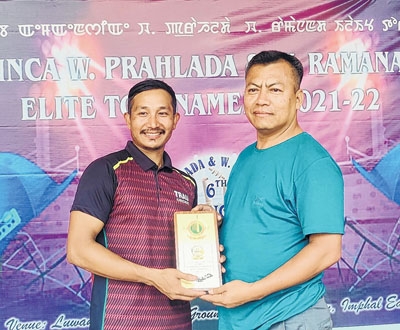 By Our Staff Reporter
IMPHAL, Jun 10 : Priyojit Kangabam blazed off a 93-ball 121 as TRAU, Kwakeithel beat PTRC, Patsoi by 44 runs for the second win in 6th MNCA W Prahlada and W Ramananda Elite Tournament Group A league match here at Luwangpokpa Cricket Stadium, Luwangsangbam.
It was the second win for the Kwakeithel team having beaten MODEL, Chingamakha in their first outing and the first loss for PTRC who were looking to extend their winning run to 5 in five matches after registering four of four previous league stage matches in the tournament.
Put in to bat first, TRAU amassed a competitive total of 234 runs for 5 in an innings that has been truncated to 38 overs and successfully restricted PTRC to 190 all out within 35.1 overs for the comfortable win.
TRAU suffered an early jolt as RK Rex removed Pukhrambam Prafullomani for 5 but Rahul Raj Kumar (25) and Priyojit Kangabam (121) forged a 105 run second wicket partnership to steady the cause.
With Abit Hijam removing Rahul Kumar and mankading Bishorjit Singh Nongmaithem in the 26th over, TRAU were reduced to 116 for 3 but the fourth wicket stand flourished yet again as Priyojit and Sidhharth Shah (22) batting sensibly to take the score near the 200 run mark.
After RK Rex removed Siddharth Shah for the fourth wicket and Priyojit for the fifth wicket to complete his three wicket haul, Anand Naorem (13) and Behul Singh Moibungkhongbam (20) were unbeaten on the crease as the innings came to an end.
In reply, PTRC also did not had best of the start as they were reduced to 17 for 2 within 5 overs as Siddharth Shah caught and bowled Gemson Mutum for 7 and Loitongbam Shitaljit was yet again caught and bowled out, this time by Sn Maniakash Kumar for 3-ball duck.
As Khangenbam Santosh (27) and Ngariyanbam Johnson (23) looked to recover the early loss, Puinchandra Sharma trapped Johnson  lbw out in the 13th over and removed Santosh in the 17th over to reduce PTRC to 77 for 4.
The slump continued with Bijenkumar Singh Nongthombam trapping RK Rex lbw out for 22 before Ngariyanbam Jameson (39 off 47 balls) and Chingakham Bidash (45 off 38 balls) forged a 68 run 6th wicket partnership to keep the chase alive.
However Puinachandra swung into action yet again to remove Jameson before Dr Siddharth Shah (3/23 in 4.1 overs) swept the tailenders to trigger PTRC collapse.
Kangabam Priyojit who shone with his bat earlier, also fetched a wicket to clinch the man of the match accolade today.