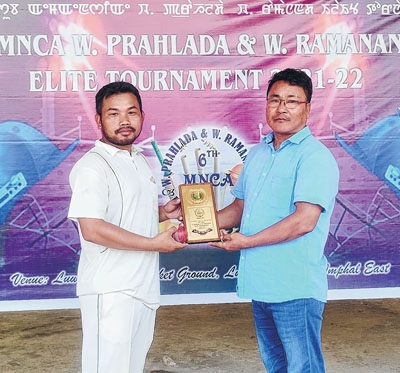 By Our Staff Reporter
IMPHAL, Jun 11 : MODEL, Chingamkha beat REYS, Khwai Nagamapal Lamabam Leikai by 35 runs to open their account in the 6th MNCA W Prahlada and W Ramananda Elite Tournament Group A competition here at Luwangpokpa Cricket Stadium, Luwangsangbam today.
MODEL, who have lost to PTRC and TRAU in the previous matches, won the toss and opted to bat first today to gather a total of 169 runs for 10 in 38.3 overs. The Chingamathak side then rode on Wahengbam Somorjit's five-for to bowl out REYS for 134 runs within 32.4 overs to pick up their first win.
MODEL faced a stiff opposition from REYS bowlers early on and were reduced to 44 for 3 within 8.4 overs as Yumkham Romario struck twice-Thoudam Deepak (3) and Veteshor Sharma (0) and Robertson Singh Laishram bowled out Yumnam Karnajit for 35.
Langlonyamba  who came in for the fourth wicket anchored well and added an unbeaten 78 runs off 101 but his cause was cut short with his partners on the other end of the crease kept departing on paltry scores as the innings folded up with 169 runs on the scoreboard.
Bipinkumar picked three wickets for 22 runs in his spell of 8 overs which contained a maiden to set up the collapse as Robertson finished with 2 for 39 in 8 overs and Alfred Hmar and Mintu Chandra managed a wicket each.
Despite bowlers doing well, REYS batting order faltered horribly in the chase as right arm off-break bowler, Wahengbam Somorjit spun web around the batters and medium pacer Somorjit Salam (3/35 in 7 overs) added teeth to MODEL's bowling campaign.
Left arm fast bowler, Dibak Naorem also snared twice to return with bowling figures of 2 for 28 runs in 8 overs which saw S Jayanta topscored with 39 off 61 balls followed by Mintu Chandra (19), Bipinchandra Langpoklakpam (14 not out) and Yungkham Romario Roy (14).
Wahengbam Romorjit who scored 15 runs and claimed five wickets in 6.4 overs was named man of the match.
CYCLONE, Thangmeiband will take on SCCC, Singjamei Thongam Leikai in a Group B league match tomorrow.