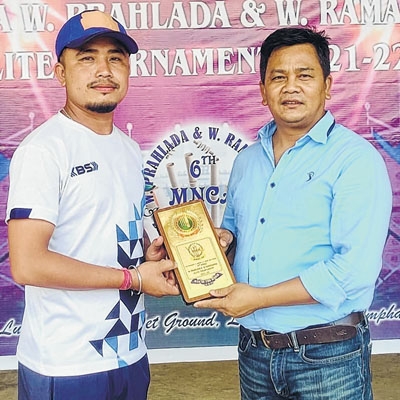 By Our Staff Reporter
IMPHAL, Jun 12 : Bikash Singh scored an unbeaten half century to guide CYCLONE, Thangmeiband to a huge 91 run victory over SCCC, Singjamei for the third straight Group B win in the 6th MNCA W Prahlada and W Ramananda Elite Tournament.
CYCLONE, who have beaten WYC-Wangkhem and Blue Hawk, Khurai in the previous Group B matches stacked up a moderate total of 208 runs for 7 in 40 overs after winning the toss and electing to bat first.
CYCLONE got off to a good start with Narsingh Yadav (38) and Jenpu Kamei (17) forging a 54-run first wicket partnership before Narsingh got mankaded (run out) in the third delivery of the 12th over by Abdul Kasim.
Pinkey Sanasam then removed Jenpu Kamei for the second wicket as the scoreboard read 64 before Longjam Ronald (11) was trapped lbw by Lishan Meitei Khaidem in the 20th over.
With the departure of Loktongbam Santosh (1) and Kishan Laishram (32), CYCLONE slipped to 104 for 5 but Bikash Singh clobbered three sixes and two fours on the way to his 54-ball 66 and guided CYCLONE to 208 for 7. Spin duo of SCCC, Pinkey Sanasam (2/39) and Lishan Meitei Khaidem (2/33) picked two wickets each in this innings as Rakeshwor Republic Hidangmayum and Abdul Kasim claimed a wicket apiece.
In pursuit, SCCC reeled under pressure from the onset and eventually succumbed to 117 all out within 38.4 overs as off break bowler Thoudam Akshaykumar wreaked havoc by snaring four wickets for 22 runs in just 6.4 overs to stem the collapse.
Jaali Ahamed (19), Lishan Meitei (10), Sandeep Chakraborty (20) and Rohit Singh Moirangthem (29) found their names on the scoresheet with double digit scores in the chase which also saw Maisnam Raju bag two wickets and Bikash Singh, Nongmaithem Suraj Singh, Kishan Laishram and Longjam Ronald Meitei share a wicket apiece.
Bikash Singh who hit a half century and fetched a wicket was eventually named man of the match.
TRAU will play CRAU in  a Group A league match tomorrow.