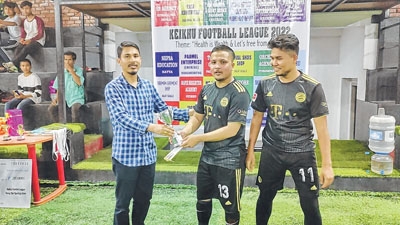 By Our Staff Reporter
IMPHAL, Jun 13 : Kshetrigao AC MLA, Sheikh Noorul Hassan has affirmed that he will extend all possible support to ensure Kshetrigao AC become a sports powerhouse and a model assembly segment in the State.
He was attending a closing ceremony of "Keikhu Football League 2022" as chief guest when he gave the assurance. He also gave away medals and prizes to the top honours of the football tournament organised under the theme " Health is Wealth and Let's Free From Drugs".
Addressing the gathering, Sheikh Noorul Hassan highlighted the significance of games and sports and called upon youth to refrain from all forms of intoxicants.
He also urged students to be very mindful and use time cautiously to help build Kshetrigao AC, an Assembly segment free from drug menace.
Maintaining that he has been providing assistance to sportspersons, the MLA also assured to continue to the cause to help AC become a sports powerhouse in the years to come. He also maintained that a Football Turf Ground will be brought up within next year.
He also spoke highly of the Chief Minister N Biren's campaign against drugs. Calling upon all in the AC to come out in support of the campaign, he also added that he will not compromise in matters related to drugs.
He went on to express his desire to see Kshetrigao AC a self reliant model assembly segment and appealed to all to support in realising the goal.