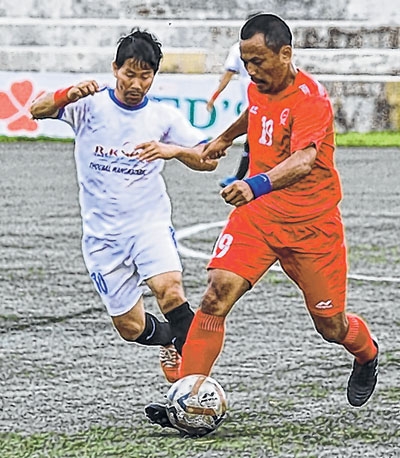 By Our Staff Reporter
IMPHAL, Jun 13 : The semi-final line up of the 4th Sangai Trophy Veteran Football Championship was completed with SVA and UVSA securing wins in the last two quarter final matches staged today here at Artificial Turf Ground, Lamlong Thongkhong.
In the third semi-final match, Group C winners UVSA notched up a 2-0 win over Group A runners up FLAM, Yaiskul to book a place in the semi-finals.
Kh Sanaton (10') and W Ajit (62') scored on either side of the break to hand UVSA the win as FLAM failed to make the best use of the chances they had.
Later in the last quarter final match, Group D winners VSAI, Thangmeiband went down by 2-0 goals to SVA, Khongjom Keirak who finished Group B runners up.
Both the goals for SVA were scored by H Momocha back to back in the 28th minute and two minutes into the stoppage time of the first half (35+2').
TBSFA FC, Taobungkhok will play FC Imphal, Mayaikoibi in the first semi-final match on June 15 while UVSA, Lilong Chajing will take on SVA in the other semi-final match on June 16. The final is scheduled on June 19.