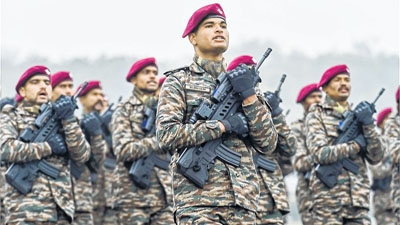 New Delhi, Jun 14
India on Tuesday announced a new recruitment model called Agnipath for the short-term induction of soldiers in the armed forces, with the new scheme replacing the legacy system of recruitment to lower the age profile of the three services, ensure a fitter military and create a techni-cally adept war fighting force capable of meeting future challenges.
The far-reaching and much-debated recruitment reform will change the composition of several British- era regiments that recruited soldiers from specific castes such as Jats, Rajputs and Sikhs, and create an All-India, All-Class (AIAC) system to provide equal opportunities to youth across the country, top Government officials said.
The Agnipath scheme, cleared by the Cabinet Committee on Security on Tues- day, seeks to recruit soldiers, including women, for only four years with a provision to retain 25% of them in the regular cadre for another 15 years after another round of screening, enhance the operational preparedness of the armed forces and create a skilled and dynamic work force for employment in other sectors, top Government officials said.
Defence Minister Rajnath Singh announced the scheme, which has been at the centre of an intense debate over how it will play out and its implications for national security, at a media briefing in the presence of the three chiefs.
The scheme will provide India’s youth an opportunity to serve in the armed forces, and it has been introduced to strengthen the security of the country, the Defence Minister said. “The youthful profile it will create will benefit the armed forces as these recruits can be easily trained for new technologies, and their health and fitness levels will also be better…Don’t doubt the scheme. It will strengthen national security,” Singh said.
The Agnipath model is expected to bring down the average age of a soldier in the armed forces from the current 32 years to 24-26 years over the next six to seven years, said Lieutenant General Anil Puri, Additional Secretary, Department of Military Affairs.
The Agnipath model is only for the recruitment of personnel below officer (PBOR) rank in the army, air force and navy for four years, including 10 weeks to six months of training.
“During the implementation and stabilisation of the scheme, the army’s operational capabilities and preparedness along the borders, and the ability to deal with internal security challenges will be fully main- tained,” said army chief General Manoj Pande.
He said the change would bring new “vigour and confidence” in the army and make it “stronger and more capable.”
Those recruited under the new scheme will be called Agniveers, will draw an annual package  of Rs 4.76 lakh in the first year of service and Rs 6.92 lakh in the fourth, will get a non-contributory insurance cover of Rs 48 lakh, and an additional ex-gratia payment of Rs 44 lakh for death attributable to service, the Defence Ministry said.
Soldiers who are released after four years will get Rs 11.71 lakh as Seva Nidhi severance package, including Rs 5.02 lakh contributed by them during their service. The soldiers released after four years will not be entitled to pension, while those retained to serve for another 15 years will get the retirement benefit.
“A wider recruitment base will provide equal opportunities to youth from all parts of the country to join the army. Screening and selection, based on a sound, transparent, fair and robust assessment system, will ensure that the army retains the ‘best of the best’ for longer service. These personnel will form the core of the organisation,” the army chief said.
The armed forces will recruit 46,000 Agniveers - in the age group of 17 and a half and 21 years - this year, with the first recruitment rally under the new model to be held in 90 days, the ministry said.
The air force is looking to tap into this source of dynamic young people, train and expose them to the high-tech environment and hone their skills for future employment, said IAF chief Air Chief Marshal VR Chaudhari.
Navy chief Admiral R Hari Kumar said the navy would induct women sailors under the new scheme. “All preparations have been done, there are no difficulties. The navy is a gender-neutral service,” Kumar said. Currently, only the army recruits women in the PBOR cadre and that too only in one branch – Corps of Military Police.
The government said the scheme is open to women based on service requirements.
“The dividends of a short military service to the nation, society and the youth of the nation are immense. This includes inculcation of patriotism, team work, enhancement of physical fitness, ingrained loyalty for the country and availability of trained personnel to boost national security in times of external threats, internal threats and natural disasters,” said a defence ministry statement.
Several veterans have, however, questioned the Agnipath model and argued that its disadvantages may outweigh the advantages.
“The government should have launched a pilot project to weigh the pros and cons of the scheme before announcing it. The scheme will erode the ethos of the units and the regimental system,” said military affairs expert Lieutenant General Vinod Bhatia (retd).
The army was beginning to feel the strain of a manpower crunch stemming from the Covid-induced freeze on recruitment for over two years. It is currently short of around 125,000 soldiers in the PBOR cadre, with the deficiency growing at the rate of more than 5,000 men every month. It has an authorised strength of 1.2 million soldiers.
Soldiers recruited through the legacy recruitment system serve the armed forces for about 20 years before they retire in their late 30s along with a pension. Hindustan Times