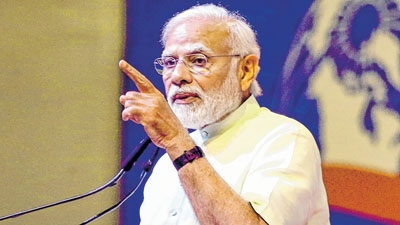 New Delhi, Jun 14
Prime Minister Narendra Modi on Tuesday announced that his Government would be recruiting 10 lakh personnel within the next 18 months, "on a mission mode", a major drive after recruit-ment to Government jobs was derailed following the COVID-19 pandemic.
In a tweet from his official handle, @PMOIndia, early on Tuesday morning, Mr Modi said: "PM @narendramodi reviewed the status of human resources in all departments and ministries and instructed that recruitment of 10 lakh people be done by the Government in mission mode in the next 1.5 years."
The announcement came on a day when Defence Minister Rajnath Singh and the three Service Chiefs announced the ‘Agnipath’ scheme of recruiting youth between the ages of 17.5 and 21 for a four-year stint in the armed forces with a provision of voluntary retention after this period, based on merit.
Unemployment has emerged as one of the major challenges before the Modi Government after two years of the pandemic and its attendant economic woes. An additional problem with regard to recruitment to Government jobs has been the frequent leak of examination papers both for departments such as the Railways and for teacher recruitment as well. During the recently concluded Uttar Pradesh election in fact, police lathicharged protesting students in Prayagraj and in Patna, Bihar, who had been preparing to appear for Railway Recruitment Board Exams but were told that the exam had to be cancelled because the question paper had leaked.
While not sharing figures of which department would be recruiting how many, a senior Government official shared that much of the recruitment would be in the Railways, armed forces (‘Agnipath’ and regular recruitment which had been frozen through the pandemic), the Central Paramilitary Forces, Goods and Services Tax (GST) departments, including customs and excise and administrative staff for Government- owned banks and insurance companies. The Hindu