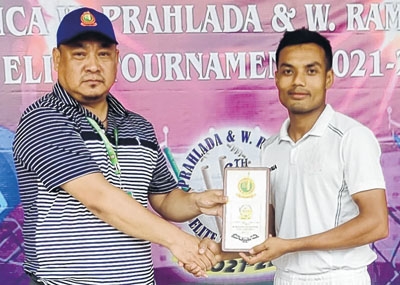 By Our Staff Reporter
IMPHAL, Jun 15 : Blue Hawk, Khurai Lamlong capped their Group B campaign in the 6th MNCA W Prahlada and W Ramananda Elite Tournament with a 6 run (DLS) win over SCCC, Singjamei Thongam Leikai in a rain curtailed match.
With the result, Blue Hawk are on top of the table for the time being with four wins in five matches. With three wins, CYCLONE, Thangmeiband (three off three) and Al-Ameen  (three out of four) too remained as strong contenders for the two semi-final spots from the same group.
Blue Hawk, who defeated WYC, Wangkhem in the previous match for the third win won the toss today and elected to bat first.
They were bowled out for just 107 runs in 34 overs but got a relief as rain disrupted the play when SCCC were at 47 for 4 in 18 overs. As the match could not be continued, the target was revised at 54 runs in 18 overs via DLS method and  Blue Hawk eventually emerged victorious by 6 runs.
In Blue Hawk innings, Amom Guniram made the most of 42 runs on the back of 3 fours and 1 six while Wakambam Samson struck 26 runs as SCCC's off break bowler, Lishan Khaidem  ran through the batting line up on the way to his 4 wicket haul (4/14 in 8 overs).
Sandeep Chakraborty and Rakeshwor Republic Hidangmayum also snared two wickets each in this innings as Abdul Kasim earned a single.
In pursuit, Ullenyai scored run-a-ball 19 and Rohit Singh Moirangthem scored an unbeaten 12 off 35 balls before rain played spoilsport.
Blue Hawk's Jitendra Bishan Thakur picked two wickets while Wakambam Samson and Mutum Pritam claimed a wicket apiece in this innings.
BLUE HAWK's top run getter Amom Guniram was eventually adjudged man of the match.