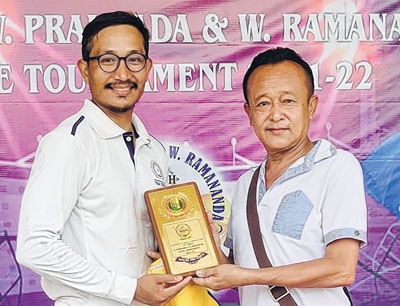 By Our Staff Reporter
IMPHAL, Jun 16 : TRAU, Kwakeithel consolidated themselves on the top of the Group A table in the 6th MNCA W Prahlada and W Ramananda Elite Tournament after beating REYS, Nagamapal by 60 runs for the fourth straight victory here at Luwangpokpa Cricket Stadium, Luwangsangbam.
Having won the toss and elected to bat first, TRAU posted a competitive total of 177 runs for 7 wickets in allotted 30 overs courtesy sensible batting from Pukhrambam Prafullomani and Kangabam Priyojit and restricted REYS to 117 runs in 28.3 overs to ensure themselves a place in the semi-finals with a game left to spare.
TRAU faced stiff opposition early on and lost Behul Singh Moibungkhongbam for 2 in the 2nd delivery of the fourth over to Kiran Laishram but Pukhrambam Prafullomani and Priyojit provided the team a crucial 71-run second wicket partnership to keep things on track.
TRAU lost Prafullomani (40) for the second wicket to Alfred Hmar when the board read 77 but Priyojit (87) kept the scoring spree very much alive to forge a crucial 82-run third wicket partnership with Bishorjit Singh Nongmaithem (21) to take the score past the 150 run mark.
Alfred Hmar then prised out Priyojit for 87 for the second wicket and went on to claim two more wickets- Dr Siddharth Shah (5-ball duck) and Anand Naorem to return with the best bowling figures of 4/33 in 6 overs.
Borish Khomdram was unbeaten on 10 as the innings came to an end with 177 runs for 7 on the board.
Alfred Hmar's four wicket haul however went in vain as Bijenkumar Singh (4/14 in 6 overs) and Amritakaran Singh Yumnam (3/19) of TRAU ran riot across the batting order of REYS after Kiran Laishram (27), Mintu Chandra (28) and Yungkham Romario Roy (21) provided initial flourish. Anand Naorem of TRAU also did well to claim two wickets sparing just 19 runs in his spell of 6 overs and Priyojit, who hit a half century earlier, took a wicket for 9 runs in 4 overs to walk away with the man of the match accolade.
CHAMP, Khagempali will play WYC (W) in a Group B league match of the tournament tomorrow.